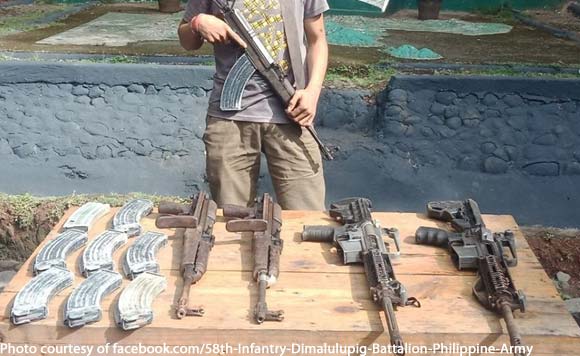 The Army troopers have recovered an arms cache in Misamis Oriental after a commander of the communist New People’s Army (NPA) gave information about the firearms.

Alias Lakay first surrendered to Barangay Captain Claresa E. Bacullo of Barangay Linabu in Claveria municipality on November 28, bringing along with him his AK 47 rifle.

Meanwhile, Barangay Councils of Brgys. San Isidro, Tudela and Manat, all of Trento, Agusan del Sur, together with 75th IB facilitated the surrender of 23 Militia ng Bayan and the withdrawal of support of 160 members of the communist group’s Underground Mass Organization (UGMO) on November 29.

From January 1 to November 30, a total of 696 NPA regulars surrendered to the authorities or an average of two NPAs per day. For the same period, 1,050 Militia ng Bayan have yielded to the authorities while 4,402 UGMO members have severed their connection with the Maoist group.

The surrenderees have brought with them a total of 689 firearms of various caliber, Eastmincom said.

Duterte claims a Cabinet member was also molested by priests: Kababata ko, one of the brightest din

Mayor Sara hits use of ‘Manila’ song in SEAG opening

US gives P201M aid to Covid-19 fight in Mindanao