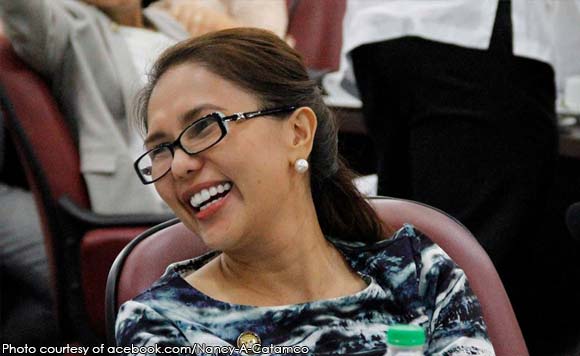 0 401
Share
Want more POLITIKO News? Get the latest newsfeed here. We publish dozens and dozens of politics-only news stories every hour. Click here to get to know more about your politiko - from trivial to crucial. it's our commitment to tell their stories. We follow your favorite POLITIKO like they are rockstars. If you are the politiko, always remember, your side is always our story. Read more. Find out more. Get the latest news here before it spreads on social media. Follow and bookmark this link. https://goo.gl/SvY8Kr

The Sandiganbayan’s Sixth Division affirmed the suspension of North Cotabato Governor Nancy Catamco over her charges in relation to the fertilizer fund scam.

“The arguments raised by the accused are essentially a rehash of her previous arguments and have been considered by the court,” the resolution read.

According to the anti-graft court, Catamco’s claim that given the timeframe of the alleged scam, the law could not be applied to her case since she was still a private individual at the time, had no basis in law.

The court reiterated that the law does not “require or mention that an incumbent public officer must be in government service at the time of the commission of the offense.”

Catamco’s charges originated from the alleged anomalous awarding of a P5 million government contract to Perzebros Corporation without public bidding.

It was shown that Catamco and her former husband Pompey Reyes owned the private corporation.

The contract was for the purchase of liquid fertilizer valued at P1,500 a pop, for a total of 3,333 bottles, which the Commission on Audit found to be overpriced by over a thousand pesos.

For this act, Catamco was charged with violating the Anti-Graft and Corrupt Practices Act, which also prescribes the suspension from public office under Section 13.

In the resolution, the anti-graft court ordered the Department of Interior and Local Government to implement the suspension order.