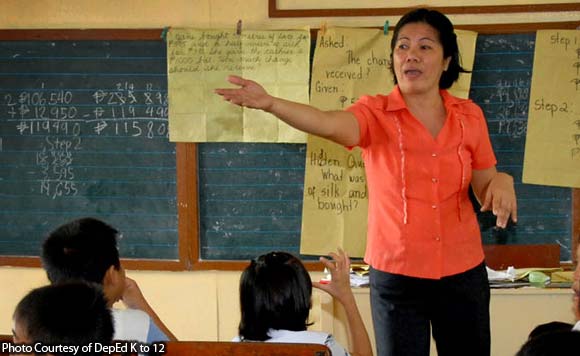 House committee on appropriations chairman Karlo Nograles expressed full support for an appeal to exempt from taxes the honorarium and allowances for public school teachers who will serve in the May 14 synchronized barangay and Sangguniang Kabataan (SK) elections.

“I am backing the call of Department of Education (DepEd) Secretary Leonor Briones for tax-free allowances and other renumeration for our public school teachers,” the Davao City congressman said.

“During election season, no group of people in government sacrifices more than them; they deserve it,” Nograles said in a statement.

Earlier, the Bureau of Internal Revenue (BIR) said that it would take five percent on the honoraria and transportation allowances of the teachers who will work in the electoral board as withholding tax.

“The stipend for teachers is not that big to begin with especially when you compare it to the daunting task at hand. Sparing it from tax will be consistent with President Rodrigo Duterte’s pro-people stance, which we saw with the doubling of the base pay of the lowest-ranked military and uniformed personnel (MUP) earlier this year,” noted Nograles.

After being rescheduled twice, the barangay and SK elections will finally take place this coming Monday, May 14. There are more than 42,000 barangays or villages in the entire country country.

In the lead up to the polls, DepEd under Briones has been aggressively negotiating with the Commission on Elections (Comelec) for an increase in the money to be received by the teachers.

“I applaud Secretary Briones for standing up for our teachers, without whom these village and youth council polls or any election for that matter would be impossible,” Nograles said.

“If Comelec would just give due recognition to the fact that the teachers are their indispensable partners in this endeavor, then they would find the increase both reasonable and necessary,” he said.

Paolo ain’t off the hook yet: Ombudsman probing Duterte’s son