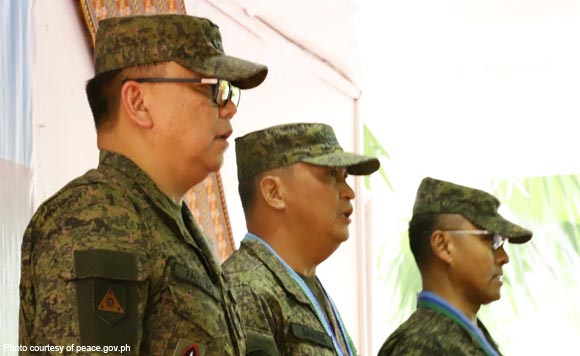 The newly-installed commander of the Armed Forces of the Philippines’ (AFP) Eastern Mindanao Command (Eastmincom) has vowed to put an end to the communist insurgency and bring genuine peace in his area of responsibility.

“The Eastern Mindanao Command has spearheaded the fight against the communist terrorists for several years already, and our efforts and innovations in ending local communist armed conflict have become the benchmark of success for the whole AFP,” said Major General Jose Faustino in his speech during the change of command ceremony held Saturday, January 25, in Davao City.

Faustino assumed the command from acting Eastmincom chief, Brigadier General Alfredo Rosario. Prior to his new assignment, Faustino led the Army’s 10th Infantry Division while Rosario held the Eastmincom post in a temporary capacity after its chief, General Felimon Santos, was named as AFP chief-of-staff.

“We will continue to do so. Not because it is part of our mission, but because it is the righteous thing to do in my almost three decades of service to the nation,” Faustino said.

“I have come to understand not just the ideology behind this communist terrorist group but also the endless manipulations, the deceptions, the utter horror brought about this group to our children, to our families. Countless innocent children have died, families broken, and parents suffering from the loss of their loved ones. Enough is enough. this has to end,” he said.

Faustino, whose area of responsibility covers half of Mindanao’s land area, said he will “take the fight to the heart of their ideology, to the center of their comfort zones, and to the deepest and remotest guerrilla bases.”

“We will not tire. We will not falter. We will break them hard so that no Filipino will become hostage to this godless communist ideology ever again,” he said.