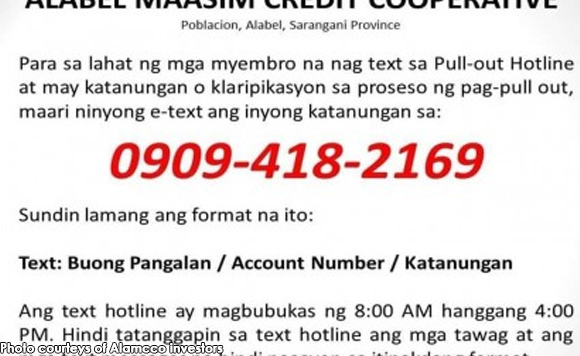 GENERAL SANTOS CITY — The National Bureau of Investigation (NBI) is set to file within the week additional charges for syndicated estafa against the officials of a cooperative based in Sarangani province that allegedly operated an illegal investment scheme.

Lawyer Regner Peneza, head of the NBI-Sarangani/General Santos District Office (Sardo), said Tuesday they are currently processing around 100 new complaints from residents who claim they were victimized by the investment scheme of the Alabel-Maasim Credit Cooperative (Alamcco).

Peneza said the victims come from this city and parts of South Cotabato and Sarangani provinces, many of whom flocked to the local NBI office here late last week.

“These are additional cases against Alamcco, with varying figures but quite substantial and run into millions also,” he said in an interview.

Aside from syndicated estafa, he said Alamcco officials will also face charges for violation of the Securities Regulation Code.

Peneza said they will file the complaints with the Department of Justice’s special task force in Manila along with personnel from the Securities and Exchange Commission (SEC) in Manila and Davao.

Alamcco was earlier flagged by SEC and the Cooperative Development Authority for illegally soliciting investments from the public at a monthly interest of 35 percent.

Acting on a directive from President Rodrigo Duterte, NBI agents raided Alamcco’s offices in June in Alabel town in Sarangani, this city, and in Koronadal City.

In an Oct. 1 report, NBI-Sardo listed at least 152 complaints against Alamcco and Almamico, covering unrecovered investments of PHP47.1 million.

Peneza said they expect to receive more complaints against Alamcco and other entities in the coming days. (PNA)

Kitty getting better after getting dengue

US gives P201M aid to Covid-19 fight in Mindanao