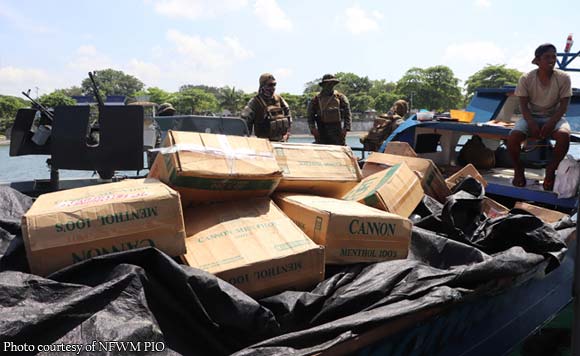 ZAMBOANGA CITY — Operatives of the Naval Forces Western Mindanao (NFWM) intercepted a shipment of some P4 million worth of smuggled cigarettes off this city, a top Navy official said Tuesday.

Rear Adm. Erick Kagaoan, NFWM commander, said the shipment of smuggled cigarettes was intercepted around 8:50 p.m. Saturday near the shore of Barangay Campo Islam, this city.

Kagaoan said the NFWM operatives were on anti-smuggling operations when they intercepted M/V Champion, a “jungkung” type motorboat, loaded with 100 master cases of cigarettes smuggled from Indonesia to this city via Sulu.

He said the motorboat is owned by Elvison Judaini, a resident of Barangay Asturias, Jolo, Sulu and is operated by a certain Boy and two other crew, Azmil Bin Jerry and Kadil Al-Amin Jilhano.

He said motorboat, its crew, and the smuggled cigarettes — Fort, Astro, Bravo, and Canon Menthol –were taken to the Ensign Majini Pier at the Naval Station Romulo Espaldon for proper documentation and later turned over to the Bureau of Customs.

“Naval troops sustain their maritime interdiction and other operations to curb and preempt smuggling and other illegal activities in the operational area,” he said.

“We are impelled to bolster our naval operations to end illegal activities and lawlessness in the area,” Sobejana added.