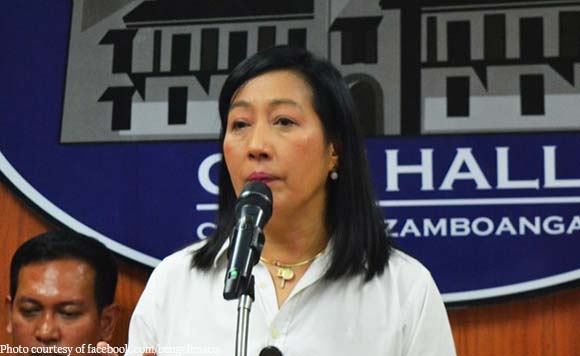 0 149
Share
Want more POLITIKO News? Get the latest newsfeed here. We publish dozens and dozens of politics-only news stories every hour. Click here to get to know more about your politiko - from trivial to crucial. it's our commitment to tell their stories. We follow your favorite POLITIKO like they are rockstars. If you are the politiko, always remember, your side is always our story. Read more. Find out more. Get the latest news here before it spreads on social media. Follow and bookmark this link. https://goo.gl/SvY8Kr

Zamboanga City Mayor Beng Climaco has sought for the cooperation of the Zamboanguenos to ensure the security of the city amid the recent suicide bombing in Sulu.

“We ask the people to help and cooperate with the authorities because peace is very fragile amid the suicide bombing in Sulu the other day,” said Climaco, who led Monday the program to remember the heroes of the 2013 Zamboanga siege.

On September 8, a suicide bomber, who was a foreign-looking woman, attacked in Indanan, Sulu. She was the lone fatality in the incident.

“We can never allow another attack that is why our security forces have worked double time to ensure the safety of the city. Zamboanga City is ours—Christians, Muslims and Lumads. We need to really safeguard the fragile security of the city,” the mayor added.

She noted that six years after the siege, the city remains relatively peaceful and more businesses have flourished.

“We have returned the siege victims, hundreds of families, to their permanent shelters except for 90 tagged families awaiting transfer to their permanent homes, two big malls have opened and one more to open this coming December, more than 13,000 businesses have registered in 2018, more job opportunities, and we have achieved peace but fragile due to constant threats,” she said.