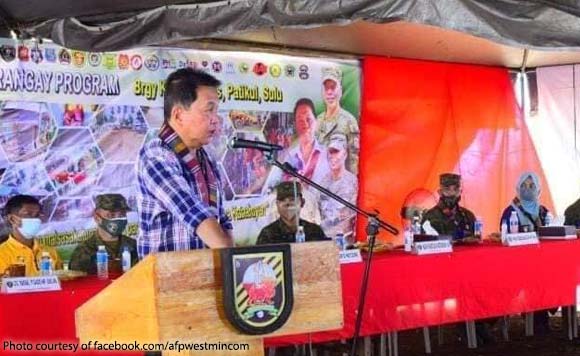 Sulu Governor Abudusarkur Tan has expressed gratitude to the military and other stakeholders in helping some 200 families to return to their homes in Barangay Kabbon Takas in Patikul town after they were displaced for almost four years due to chaos posed by the terrorist group in the area.

According to Western Mindanao Command (Westmincom,) Tan was one of the guests in a short program held before the 206 displaced families returned to their homes Friday, November 20.

Tan said that this new episode in the life of the IDPs (internally displaced people) was made possible through the concerted effort of the provincial government, the military, the Department of Social Welfare and Development (DSWD), and other partners and stakeholders.

He also expressed his appreciation for the professionalism and sincerity exhibited by the troops of the 11th Infantry Division and the Joint task Force Sulu led by Maj. Gen. William Gonzales.

The provincial government of Sulu provided each of the returning families with starter kits which include roofing materials for the reroofing of their shelters, food packs, sacks of rice, footwears and cash amounting to P5,000.00, military said.

Westmincom commander Lt. Gen. Corleto Vinluan Jr. said despite all the hindrances and difficult circumstances including the existence of the invisible enemy, the healing and rebuilding of the previous conflict-affected areas in Sulu continues.

Kabbon Takas is known as one of the strongholds of the Abu Sayyaf Group. It became a ground zero in the previous years where most armed encounters between the group and the government forces transpired hence, the displacement of the populace who evade being caught up in the middle of crossfires.

The ASG perpetrated several profane acts in the said barangay including the burning of a school.

But, through the relentless efforts of the military’s Joint Task Force Sulu, the ASG eventually lost its supremacy and its capability dwindled. The military gained ground and was able to sustain the momentum thus, this event was realized, Vinluan said.

It took the soldiers of the 1102nd Infantry Brigade, the local government, and the people of Kabbon Takas to bring back the area to normalcy. They cleaned the surroundings, concreted the roads, provided a water system, and built houses.

The local chief executives, the members of the Municipal Task Force to End Local Armed Conflict (MTF-ELAC) of Patikul, the military officers, and the barangay officials of Kabbon Takas signed the People’s Peace Covenant declaring the Abu Sayyaf Group and other lawless elements as persona non-grata in the community.