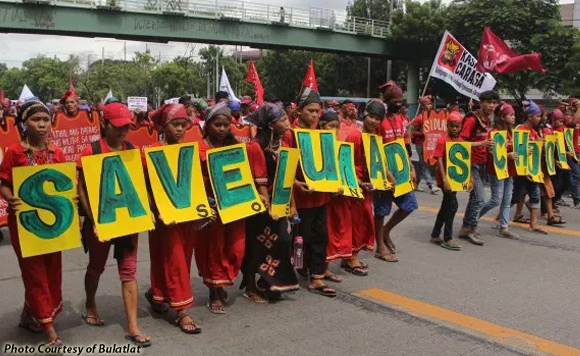 A human rights group demands the government to withdraw the criminal charges filed against volunteer teachers and members of a lumad schools network.

Cristina Palabay, Karapatan secretary general, said in a statement that murder and frustrated murder charges were filed by the Marine Battalion Landing Team (MBLT) against six volunteer teachers and seven members of Parents, Teachers and Community Association of the Center for Lumad Advocacy, Networking and Services Inc. (CLANS) in South Central Mindanao.

Karapatan considers the “trumped-up charges by the military” as a form of harassment against the volunteer teachers.

According to Palabay, the recent attacks by the military against the lumad led to the closure of 33 CLANS schools in the provinces of South Cotabato, Sarangani, Davao del Sur. Davao Occidental and Sultan Kudarat. At least 1, 000 lumad students were also displaced due to the closures.

Palabay said the Duterte administration is now using legal tactics “to demoralize communities and prevent them from asserting their rights.”

“State security forces are employing their dirty maneuvers again, using the law to falsely prosecute those who serve communities long neglected by the government,” Palabay said in the statement. “We demand the immediate withdrawal of these trumped-up charges,” she said.

The charges came after Lt. Col. Jose Marie Santos, MBLT 2 commander, claimed communist rebels killed a Marine and the wounded nine others in an ambuscade in Kalamansig, Sultan Kudarat.

But Santos denied responsibility for the closure of CLANS schools. He said the Department of Education and the local government implemented the closure order because he said CLANS teachers were not licensed to teach and “their school did not have license to operate.”