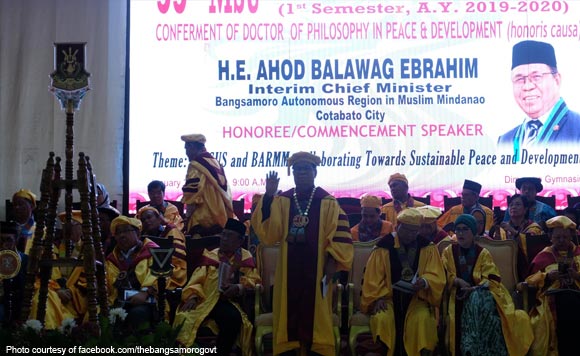 This was his message during the 55th Commencement Exercises of the Mindanao State University (MSU) Tuesday, January 28, at MSU-Main Campus in Marawi City.

Ebrahim was the guest speaker and was also conferred an honorary doctorate degree (honoris causa) as Doctor of Philosophy in Peace and Development by MSU during the commencement rites.

“What I achieved today is not my recognition, it is your accomplishment— the Bangsamoro. I am accepting this (honorary degree) not for myself, but for the Bangsamoro struggle and the Bangsamoro people,” he said in the speech.

“Our arm struggle has come to an end, but our struggle to attain progress and provide a better life for our people; we are just at the beginning,” Ebrahim added.

Those 28 students, who graduated with honors, were granted Presidential Decree 907 or the Civil Service Commission eligibility equivalent to professional level eligibility.