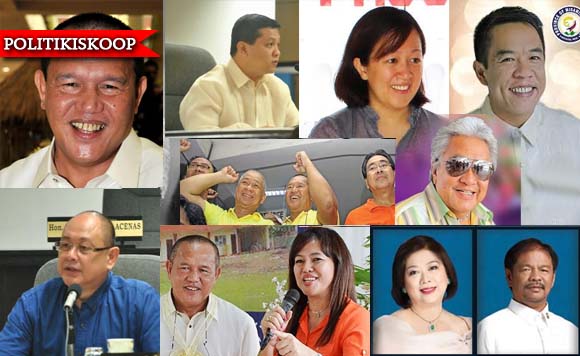 The clan has finally decided to get the elder Emano back into city hall and to stave off the challenge of the Liberal Party (LP) for the provincial capitol where his son Bambi dispenses favors and projects to their favoured municipalities in Misamis Oriental.

He lost the 2013 polls to incumbent mayor Oscar Moreno of LP.

In Cagayan de Oro, Mayor Moreno and incumbent Reps. Rolando “Klarex” Uy (LP) and Rufus Rodriguez of the Centrist Democratic Party (CDP) have formed a formidable alliance to hold the Emanos at bay.

Dongkoy Emano counts as his allies Vice Mayor Ian Nacenas and the majority of the 16-member city council that includes his daughter Nadya and his son-in-law, Councilor President (yes, his name is President) Elipe.

Curiously, members of the Emano clan are listed as allies of the Villars of the Nacionalista Party (NP) and the Binays of the United Nationalist Alliance (UNA). That is how weird local politics can become.

Let us see what the Emano politikos have in mind for 2016.

Emano and his Padayon Pilipino already have a complete slate of candidates for the City Council and the two legislative districts. They allegedly have a command over 54 barangay chairmen of the city.

For city councilors the following were drafted by the Emano-led party:

Dongkoy can get incumbent Vice Mayor Acenas as his running mate. But Emano has yet to decide between Acenas and third-term son-in-law Councilor President Elipe on who would run for Congress in the first district versus Rep. Klarex Uy.
The Emanos also have third-term councilor Ramon Tabor running for Congress in the second district that is to be vacated by third-term Rep. Rodriguez.

Moreno, meanwhile. Is eyeing Barangay Nazareth chairperson Jocelyn “Bebot” Rodriguez – Rufus’ sister – as his running mate.
Reps. Rufus and Klarex have committed to continue their alliance with Moreno to “prevent a Dongkoy Emano reclamation of City Hall.”
In the provincial front, Gov. Bambi Emano (NP) holds sway with Vice Gov. Joey Pelaez (UNA) and majority of the provincial board. But he has to contend with the province’s two legislative districts that have Reps. Peter Unabia (LP) and Juliette Uy of the National Unity Party (NUP).
Emano and Pelaez and their incumbent party mates in the provincial board are readying themselves for battle with the alliance ticket being formed by incumbent Reps. Unabia and Uy.

The Padayon Pilipino of the Emano clan has yet to name the possible candidates for Congress in the province’s first and second districts as Reps. Unabia and Uy are publicly perceived to be “very strong candidates for re-election to Congress in 2016.”

Unabia and Uy are reportedly finalizing details of an allied provincial slate composed of candidates for governor, vice-governor, board members and complete municipal line ups in all towns of the province.

Misamis Oriental has more than 780,000 voters scattered in 23 towns and the component cities of Gingoog and El Salvador.

The Emano dynasty is facing an uphill battle in 2016 that entails defending their turf in the provincial capitol and attempting to regain Cagayan de Oro city hall at the same time.

Can this dynasty stretch their rule even longer? Abangan!

Duterte cites political dynasty as reason not to run in 2016

Ex-Lamitan VM Eisma in trouble for conflict of interest