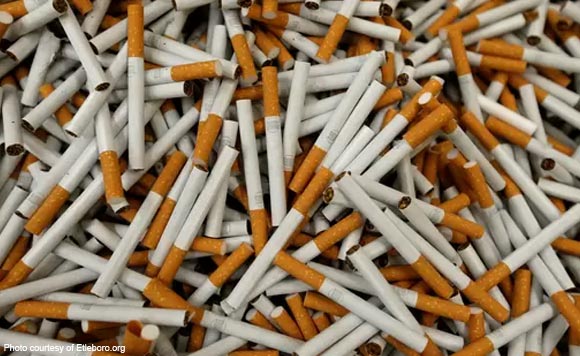 The Bureau of Internal Revenue (BIR) put its feet down and stomped out the tools of illegal cigarette-making operations in Cagayan de Oro this Thursday.

Illegal tobacco products and production machinery worth more than a billion pesos were destroyed, according to BIR Strike Team Chief Remedios Advincula.

More than a billion pesos’ worth of cigarettes were shredded, alongside cigarette-making tools worth over P120 million jackhammered by heavy-duty equipment at Barangay Bayabas.

These, according to BIR Director for Northern Mindanao Nuzar Balatero, were confiscated in raids conducted all over Misamis Oriental last May 26, 2018.

“The destruction of these machinery is mandated by law to ensure that these devices can never be used in pursuing illegal manufacturing of cigarettes,” Balatero said.

These operations were run partly by foreign nationals, according to Advincula, who refused to name the respondents who are now facing charges filed before the Department of Justice including those for the non-payment of excise taxes.

BIR Deputy Commissioner Arnel Guballa warned criminals involved in the illegal cigarette trade that the bureau and the national government will stop at nothing to curb their operations.

“The government is really bent on running against these illegal activities of people who are manufacturing cigarettes without paying the excise tax,” he said. #