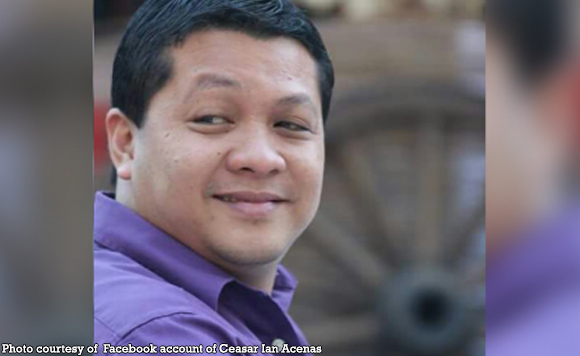 0 240
Share
Want more POLITIKO News? Get the latest newsfeed here. We publish dozens and dozens of politics-only news stories every hour. Click here to get to know more about your politiko - from trivial to crucial. it's our commitment to tell their stories. We follow your favorite POLITIKO like they are rockstars. If you are the politiko, always remember, your side is always our story. Read more. Find out more. Get the latest news here before it spreads on social media. Follow and bookmark this link. https://goo.gl/SvY8Kr

CAGAYAN DE ORO CITY – Misamis Oriental Governor Yevgeny Vincente Emano on Thursday took the cudgels for a political ally who was arrested along with four others by law enforcers in Mandaue City on Tuesday foralleged involvement in an investment scam.

In a statement on Friday, Emano said he was saddened by what happened to former vice mayor Caesar Ian Acenas, even as he implored the public not to quickly judge the former official.

“Allow him to air his side to the public and the court of law,” Emano said, adding that Acenas has proven to be a true friend and a responsible member of their party.

The governor said his father, the late former city mayor Vicente Emano, had trusted Acenas to be his running mate in the previous elections.

Emano said he has requested Provincial Information Officer Florito Dugaduga to extend assistance to the former vice mayor by providing a lawyer.

“Since Dugaduga is from there (Cebu), I believe he can help Acenas to hire a legal counsel,” Emano said.

Acenas and four other persons were arrested by a team of Criminal Investigation and Detection Group agents for their alleged involvement in an investment scam that has raked in some PHP400 million in Mindanao.

Zia Alonto Adiong: Greta is fighting a just cause!

Westmincom to tap fishing firms in guarding against poachers