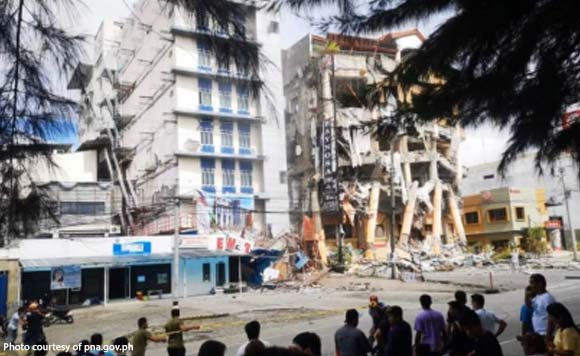 0 93
Share
Want more POLITIKO News? Get the latest newsfeed here. We publish dozens and dozens of politics-only news stories every hour. Click here to get to know more about your politiko - from trivial to crucial. it's our commitment to tell their stories. We follow your favorite POLITIKO like they are rockstars. If you are the politiko, always remember, your side is always our story. Read more. Find out more. Get the latest news here before it spreads on social media. Follow and bookmark this link. https://goo.gl/SvY8Kr

The Department of Public Works and Highways (DPWH) reported on Wednesday that the three regions in Mindanao that were hit by earthquakes in the last two weeks incurred an estimated P800-million worth of damage to infrastructure.

Based on the report, as of November 6, 10 a.m., the initial worth of damage amounted P781.682 million to roads, bridges, school buildings, and other public buildings were recorded in Regions 10 (Northern Mindanao), 11 (Davao Region) and 12 (Soccsksargen).

The DPWH said in Region 10, a total of P16.700 million worth of damage to roads was reported. However, the damage to bridges, school buildings, and other public buildings is undergoing assessment.

The DPWH reported that it has taken actions as to the repair/restoration of the damaged infrastructures which include the conduct of the rapid initial assessment of possible damages on roads, bridges, and other public buildings by concerned District Engineering Offices.

It also undertook the immediate repair of minor damages on roads and bridges.

A post-earthquake assessment is on-going in Region 11 and 12 by DPWH Teams composed of 52 technical personnel from the Bureau of Design, Bureau of Construction, Bureau of Maintenance, Regional Office and District Engineering Offices.

Continuous monitoring of conviction of national roads and bridges in earthquake-affected areas. Deployment of manpower and equipment (dump truck, backhoe, payloader and loaders, vibratory road roller) to assist the other responding agencies for clearing, relief, search and rescue operations.

The DPWH also assisted the local government unit in clearing operations and provision of equipment for the distribution of relief goods.

The earthquakes left 22 people dead and displaced thousands of others. (PNA)