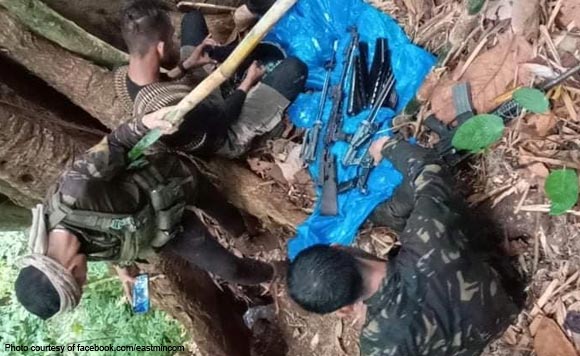 According to Eastern Mindanao Command (Eastmincom), members of the 73rd Infantry Battalion (IB) found the arms cache in Sitio Salyan, Brgy. Sapu Masla in Malapatan town Saturday, February 29, after the revelation of a certain, alias, Tarzan, a former member of NPA group being monitored in Sarangani and surrendered on February 27 to the same unit.

The weapons, which were the second arms cache of the same group to be discovered within the week, included two M16 rifle and one AK47.

On February 25, the same unit recovered firearms of the same group at Sitio Mahayag, Upper Suyan, Malapatan, Sarangani, consisting one AK47 and one Garand Rifle.

In a separate incident, elements of 88th IB seized an arms cache at the vicinity of Biblisan, Sitio Pantaron, Brgy. Banlag, Valencia City, Bukidnon in the afternoon of February 28.

In Sitio Ulingan, Brgy. Manobo, Magpet, North Cotabato, one US Springfield rifle, an IHL banned landmine and subversive document were retrieved by elements of 72nd IB on February 25.

Eastmincom has attributed the series of discovery of arms cache to the continuous dwindling of NPA personnel in Eastern Mindanao.

300 jobseekers hired on the spot in Zamboanga City job fair