Military saddened by death of minor NPA in Butuan clash 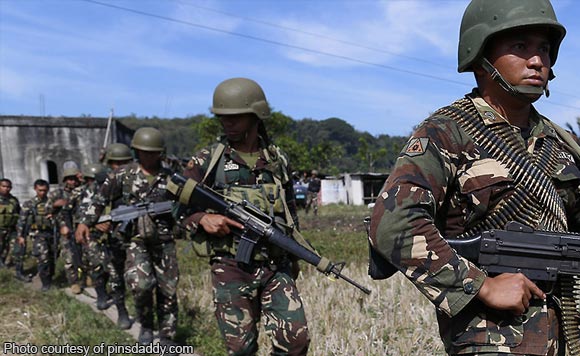 0 174
Share
Want more POLITIKO News? Get the latest newsfeed here. We publish dozens and dozens of politics-only news stories every hour. Click here to get to know more about your politiko - from trivial to crucial. it's our commitment to tell their stories. We follow your favorite POLITIKO like they are rockstars. If you are the politiko, always remember, your side is always our story. Read more. Find out more. Get the latest news here before it spreads on social media. Follow and bookmark this link. https://goo.gl/SvY8Kr

The military has expressed grief after learning that a slain communist New People’s Army (NPA) member in a recent encounter in Butuan City was a minor.

Through his brother, the NPA minor who was killed in a clash between the soldiers from the 23rd Infantry Battalion (IB) and the NPA rebels last November 30, was identified as Litboy Talja Binongcasan, 16 years old, from Sitio Shiohan, Brgy. Malinao, Gingoog City, said Lt. Gen. Felimon T. Santos Jr., commander of Eastern Mindanao Command (Eastmincom).

The unnamed brother reportedly said that Binongcasan was a Grade 6 student of Sitio Sioan Elementary School in Brgy. Malinao, Gingoog City when he went missing sometime in February this year.

“We are saddened with the fate of Litboy. His case is a clear violation of children’s rights; he was deceptively recruited for the ideology he does not even understand. This act is being condemned in the highest form. It paints the true color of the CTGs (Communist Terrorist Group) who disregard the concern and human rights of the people, particularly the children,” Santos said.

During the encounter, which transpired in Sitio Salvacion, Brgy. Manila de Bugabos, Butuan City, the government troops recovered two AK-47 rifles, one M16A1 rifle, one M16A1-RMC rifle, five civilian backpacks, two bandoleers, subversive documents, and other personal belongings along with the body of the said minor.