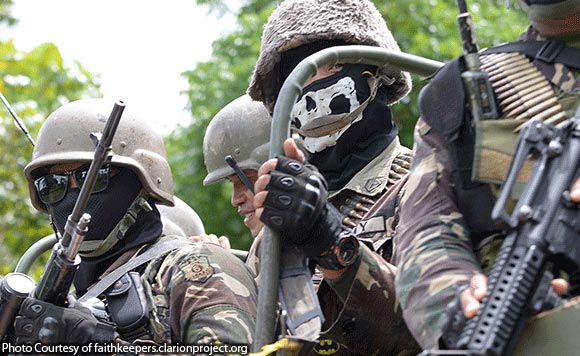 Military 105 howitzer cannons, backed by helicopter gunships, pounded on positions of the Bangsamoro Islamic Liberation Front (BIFF) overnight at the boundaries of three towns in Maguindanao which led to a mass evacuation of Teduray families in the area.

“The BIFF harassed our troops from the Army’s 57th Infantry Battalion in the area so we initiated artillery and airstrike maneuvers from 5 p.m. Thursday to 4 a.m. Friday in a bid to flush them out,” Encinas said.

Jobel Tenorio, an evacuee from Sitio Bagong, Datu Saudi town said over 100 BIFF militants occupied their community Friday, prompting them to leave behind their houses and personal belongings in no time.

“Gunfire could be heard overnight from three sides of Mt. Firis, so we decided to leave home,” Tenorio said in vernacular.

Encinas said the BIFF torched houses at Teduray communities that they occupy in battling government forces at Mt. Firis, considered as a scared ground among the Tedurays.

“There would be no let up on finishing off the BIFF terrorists in Mt. Firis,” Encinas stressed.

The provincial government of Maguindanao has attended to needs of the Teduray natives at designated evacuation centers in the affected towns. (PNA)