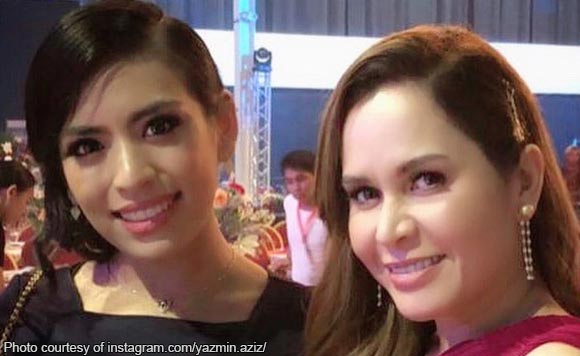 0 753
Share
Want more POLITIKO News? Get the latest newsfeed here. We publish dozens and dozens of politics-only news stories every hour. Click here to get to know more about your politiko - from trivial to crucial. it's our commitment to tell their stories. We follow your favorite POLITIKO like they are rockstars. If you are the politiko, always remember, your side is always our story. Read more. Find out more. Get the latest news here before it spreads on social media. Follow and bookmark this link. https://goo.gl/SvY8Kr

The pretty ladies took some time to take some photos together during the grand celebration of Sen. Manny’s 40th.

It’s pretty safe to say that Belo endorser and former Politiko Jinkee Pacquiao approves of her son’s girlfriend, Yazmin Aziz. Yazmin, girlfriend of Michael Pacquiao, recently shared a photo of her with her tita Jinkee on her Instagram account. The photo, taken during Sen. Manny’s 40th birthday bash at KCC Convention in General Santos, shows the two ladies all dressed up for the grand event.

“With Tita @jinkeepacquiao, a beautiful woman inside and out whom I personally admire. Taken at Tito Manny’s 40th birthday party ❤️✨ #latepost”, Yazmin, who flew all the way from malaysia to attend the party, captioned her post.

Yazmin is a World Championships of Performing Arts (WCOPA) 2017 – Silver Medalist, DZMM’s Global Pinoy Singing Idol finalist and also known for performing for President Rodrigo Duterte during his visit to Kuala Lumpur, Malaysia in 2016. She recently released her own song, Lihatlah