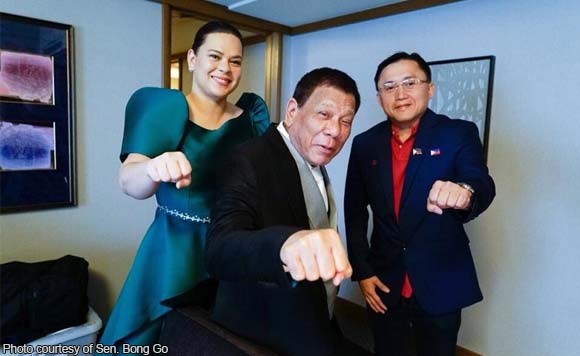 0 724
Share
Want more POLITIKO News? Get the latest newsfeed here. We publish dozens and dozens of politics-only news stories every hour. Click here to get to know more about your politiko - from trivial to crucial. it's our commitment to tell their stories. We follow your favorite POLITIKO like they are rockstars. If you are the politiko, always remember, your side is always our story. Read more. Find out more. Get the latest news here before it spreads on social media. Follow and bookmark this link. https://goo.gl/SvY8Kr

Davao City Mayor Sara Duterte-Carpio is set to represent her father, President Rodrigo Duterte, in the banquet Tuesday night, October 22, for the world leaders and other invited guests who attended the enthronement ceremony of Japanese Emperor Naruhito.

This is because the President has to cut short his trip to Tokyo due to “unbearable pain” in his spinal column near the pelvic bone as a consequence of his fall during his motorcycle ride Wednesday, October 16, Presidential Spokesperson Salvador Panelo said in a statement.

“The Chief Executive will thus have to miss the Emperor’s banquet this evening at the Imperial Palace and has requested Mayor Sara Duterte to represent him and attend on his behalf,” he said.

Duterte will return to the country Tuesday night and he will see his neurologist Wednesday for consultation.

The President went to Tokyo to attend the enthronement ceremony of the Emperor.

Panelo assured that there is nothing to worry regarding Duterte’s physical health and condition. #