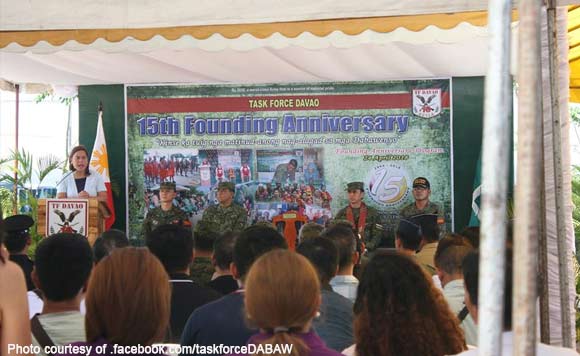 “It is not easy to be a member of Task Force Davao because for them, everyday is a nightmare because anything can happen. Your job is not easy that’s why I am very thankful for your commitment to your work,” the presidential daughter said during her attendance to the task force’s founding anniversary at its headquarters in Sta. Ana Wharf, Davao City.

“It’s been two years since the last terror attack in Davao and since then, no new (attack) happened yet that’s why we should be thankful. My greatest challenge to them is to make sure that nothing will happen here in Davao for 10 years… even more years,” she said.

She hailed the TF members for their good reputation, saying there had been no reports of abuse or complaints against any of them.

The TF Davao was organized on April 5, 2003 following the twin bombings that happened in the city, particularly at the Davao Old Airport on March 4, 2003 and the Sasa Wharf on April 2, 2003. #