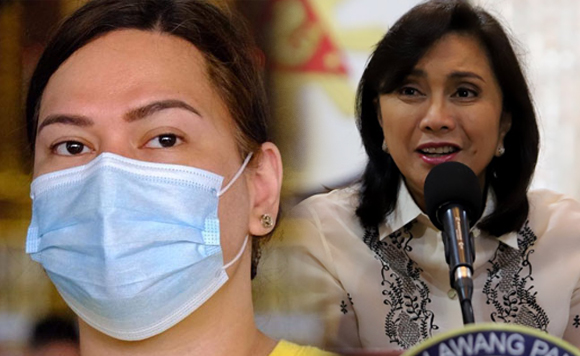 Duterte-Carpio said Robredo should refrain from giving advice if she knows nothing about what is happening on the ground.

“The VP should avoid involving the Covid-19 surge in Davao City in her attempt at politicking. There will be a proper time to attack my performance as an LCE (local chief executive) in this pandemic if she dares to run for President,” the presidential daughter said in a statement.

Duterte-Carpio made the statement after Robredo, in her radio program on Sunday, June 13, said that Davao City, which is considered by OCTA Research as one of the emerging epicenters of Covid-19 cases in the county, might want to learn from Cebu City on how to contain the virus cases.

The mayor said that giving advice has been the “hallmark” of Robredo’s term as vice president, “where she puts forth comments on matters and affairs she lacks understanding and acknowledge on and does not offer anything helpful to solve a problem.”

She said that the private sector has been very helpful and has tremendously contributed to the Covid-19 response in Davao City.

“In addition, The VP should not attack the medical community of Davao City as being inactive when they have been silently suffering and working tirelessly to help save lives since March of last year,” Duterte-Carpio said.

“She should open her eyes to the surge of cases in localities all around the world and she might be able to say that a surge in cases where 85% of the cases are asymptomatic is primarily identified by aggressive testing, coupled with tracing and isolation/quarantining,” she stressed.

Supporters of Robredo and Duterte-Carpio have been respectively pushing for their presidential bid in the 2022 elections.

Stunning! Lovelie Sangkola proves that age is just a number