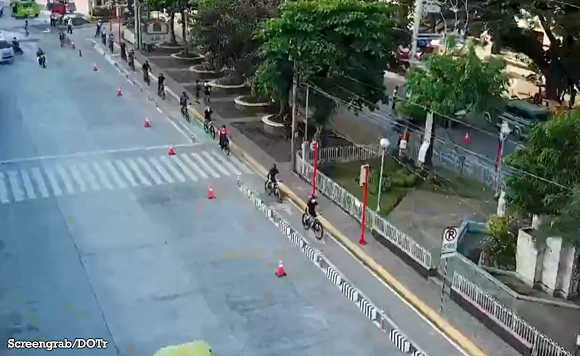 Davao City Mayor Sara Duterte-Carpio has lauded the inauguration of the 54.71-kilometer Metro Davao Bike Lane Network, which is part of the government’s effort to promote sustainability through active mobility among Filipinos.

In a speech during the virtual event held Tuesday, July 20, the mayor congratulated the Department of Transportation (DOTr), Department of Public Works and Highways (DPWH), and Mindanao Development Authority for the completion of the project that would help vulnerable road users – cyclists and pedestrians in the city, to enjoy a safer space when using the road.

“Bicycles are considered as efficient modes of transportation as they have beneficial effects in terms of health and fitness as well contribute to the improvement of our Metropolitan City by helping decongest traffic and reduce carbon emission,” she said.

During the lockdown due to the surge of Covid-19 cases, bikes start filling up the streets around the city. It became an alternative form of transportation when going to work or travel to other places since it is easier to observe social distancing instead of taking the usual public transport.

“By providing Dabawenyos with bicycle lanes, they are able to safely maximize usage of their bicycles whether as a mode of transportation for work or business or as a means for exercise and leisure activities,” Duterte-Carpio said.

The bike lane network project was officially completed on June 30, 2021, which spans across the 14 road sections. It features white and green pavement markings, signage, bollards, bike symbols, and concrete delineators to ensure the bikers’ safety. It is also equipped with solar studs and bike racks for the comfort and convenience of bikers.

Mayor Moreno debunks Duterte: We know deep in our hearts how we love Sen. Nene