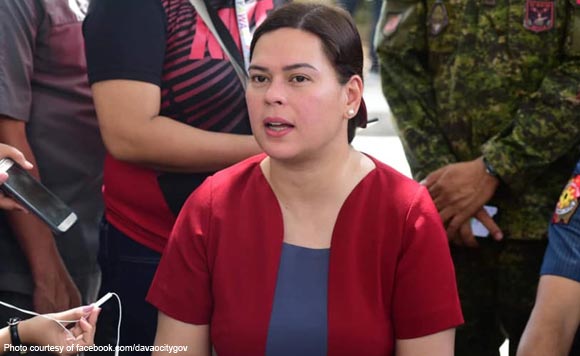 Davao City Mayor Sara Duterte-Carpio has urged the national government to spare the city from the declaration of Christmas ceasefire with the Communist Party of the Philippines-New People’s Army-National Democratic Front (CPP-NPA-NDF).

The presidential daughter also warned the Duterte administration over its move to reopen the peace negotiations with the Maoist group.

“While the declaration of Christmas truce and the prospects to reopen formal peace negotiations are acts of goodwill on the part of the Duterte government, demonstrating its strong political will to resolve the insurgency problem plaguing some parts of the country for the past years, we must be always reminded by the evil character and duplicitous nature of NDFP and its revolutionary organization, the Communist Party of the Philippines (CPP), and its armed wing, the New People’s Army (NPA),” she said in a statement.

Calling the communist rebels as spoilers of peace, Duterte-Carpio expressed belief that the holiday truce will only be used by the “terrorist groups” as an opportunity to regain communities previously cleared of their presence, consolidate their forces, and derail the progress of existing government rural development projects.

“With this, we ask the Duterte government to exclude Davao City from the scope of the Christmas ceasefire with these terrorists. We also seek the same once the national government pursues the reopening of the formal peace negotiations,” she said.

Duterte-Carpio blamed the CPP-NPA-NDF’s “countless criminal acts and treachery” for the failed past peace negotiations.

While the government’s moves for a declaration of a Christmas truce and to reopen the peace process were commendable, however, she said they are “useless and deleterious to the accomplishments of our local peace initiative, the Peace 911.”

Peace 911 is a comprehensive peace-building program of the Davao City government for conflict-affected areas of the city. It is primarily focused in Paquibato District and Barangay Dominga in Calinan District, areas identified as stronghold of the NPA rebels.

The mayor noted that from June to December 2019, the program has successfully sprung Paquibato District and Barangay Dominga from the “shackles of the NPA terrorists,” with more NPA rebels and their supporters turning themselves into the government through the program.

“To be covered by the ceasefire or the peace negotiations will only disrupt and threaten the gains of our process of peace and development in these communities formerly controlled by the terrorists,” she said.

“For these terrorist organizations, sincerity is a strange word. To believe that they desire a peaceful end to the insurgency problem would be playing ignorant of their bloody habit — how they slaughtered countless civilians in the past and made many countryside communities suffer from poverty and underdevelopment, and blaming the government for it,” she added.

Duterte-Carpio stressed that the government “should never negotiate with terrorists.”

President Rodrigo Duterte has decided to declare a truce with the Reds from December 23 to January 7 even if his security officials had recommended not to reciprocate the ceasefire declared by the rebels.

He also earlier ordered Labor Secretary Silvestre Bello III to go to the Netherlands to meet with CPP founder Jose Maria Sison for the possible resumption of the peace talks.