Mayor Sara calls for ‘malasakit’ to one another on Independence Day 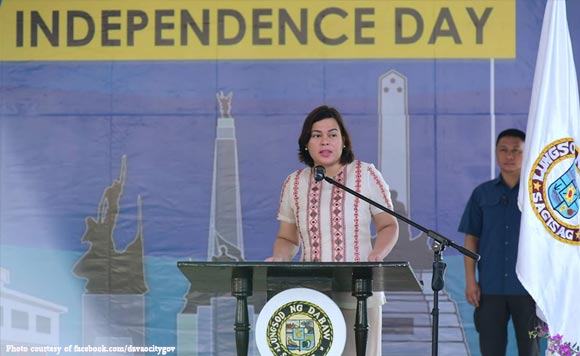 Davao City Mayor Sara Duterte-Carpio urged Wednesday the Filipinos to help one another as she led the celebration of the 121st anniversary of Independence Day.

The Filipinos could show how they value freedom if they have “malasakit” to one another, the local chief executive said in a speech.

“The freedom we gained 121 years ago will be nothing if we do not help each other out today, if we will not work together to build our communities and create a strong nation,” she said.

Duterte-Carpio said the freedom that Filipinos enjoy today was achieved through “tapang (courage)” and that they should also use the same trait to help those in need, to assist an overburdened colleague, volunteer free time to charitable causes, to aid those who are in the immediate community without expecting anything in return.

“Everywhere we turn, there is always someone who will benefit from any help we can give – children who go to school sans shoes, women who are victims of abuse, the sick and the destitute, the elderly who are left to fend for themselves,” she said.

She also asked Filipinos to help recently elected leaders and rally behind the administration to unify the entire country.

She noted that independence also meant people freeing themselves from the shackles of indifference.

“Let us reach out to our fellow men and women, let us empower the vulnerable and the disadvantaged, let us be brave enough to care,” the mayor said.