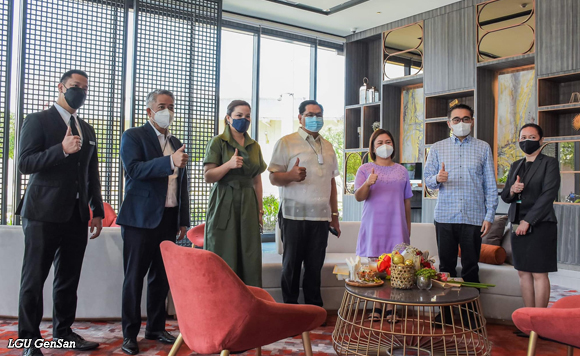 General Santos City Mayor Ronnel C. Rivera has witnessed the blessing and pre-opening of a 4-star hotel in the city.

Grand Summit Hotel is the first 4-star hotel of Robinsons Hotels and Resorts and the newest lifestyle destination situated right at the heart of General Santos City. An opulent setting for work, play, and celebrations – it aims to be remembered not as a venue, but as a heartening feeling and delightful memory.

Presently, the said 4-storeys hotel has 34 ready-for-occupancy rooms out of 102 rooms in total which was targeted to be finished before the 2021 ends including the amenities Kid’s Play Room, Swimming Pool, SPA, APEX Fitness Center, and their Grand Ballroom that could cater up to 500 persons.

Three Function Halls of Grand Summit Hotel were also blessed and are now ready for any celebration bookings.

The grand opening of the hotel will be held next year.