Mayor Rivera reiterates no phasing out of tricycles in GenSan 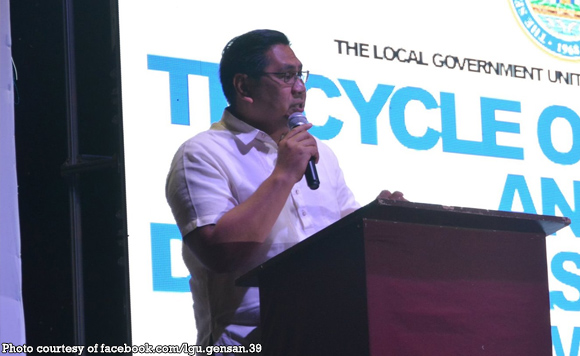 0 135
Share
Want more POLITIKO News? Get the latest newsfeed here. We publish dozens and dozens of politics-only news stories every hour. Click here to get to know more about your politiko - from trivial to crucial. it's our commitment to tell their stories. We follow your favorite POLITIKO like they are rockstars. If you are the politiko, always remember, your side is always our story. Read more. Find out more. Get the latest news here before it spreads on social media. Follow and bookmark this link. https://goo.gl/SvY8Kr

General Santos City Mayor Ronnel Rivera has renewed his assurance that the local government would not phase out tricycles as it pushes for the modernization of the transportation system in the city.

The local chief executive made the assurance during the 1st Tricycle Operators and Drivers’ Association (TODA) Summit Wednesday, January 22, at KCC Convention Center.

The TODA Summit was an engagement between local government unit and tricycle drivers and operators to address the issues and concerns of the latter confronting the transportation sector, including the operation of colorum units, traffic accidents, housing, and financial programs, health care and social security, training programs, scholarships for dependents, access to other sources of livelihood and other matters that will help them achieve improved financial security.

This is one of the measures of the government to support the source of income of growing families mostly depending on tricycle operations for livelihood in Gensan.