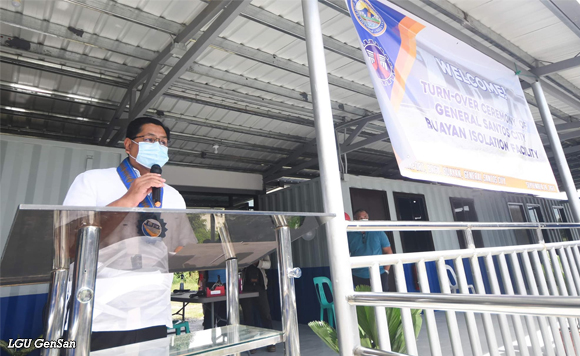 Rivera expressed gratitude to all the people behind the project, particularly the Department of Public Works and Highways (DPWH).

“This undertaking this morning is very important. This has been a long-awaited project from the National Government.
I would like to thank the leadership of Doc Jette Oco and Doc Lalaine Calonzo and of course Doc Bong Dacera. They will handle this facility and will help our constituents ug atong mga igsoon nga naigo aning deadly virus,” he said in a speech during the turnover ceremony Friday, September 24.

The new facility has a floor area of 1,760 square meters and is composed of eight 40-foot and eight 20-foot container vans that were transformed into isolation rooms, nurse station, utility or electrical rooms, and male and female quarters for frontline workers.

Each isolation room has its comfort room and air conditioning system and the same amenities are also found in the nurse station and quarters.

The facility is also provided with a generator set to ensure uninterrupted electricity day in and out. The said isolation structure costs P21,979,836.95 and can accommodate up to 40 patients.