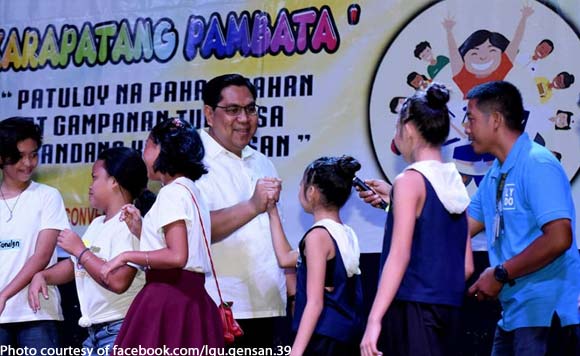 General Santos City Mayor Ronnel Rivera has underscored the programs being initiated by the local government to promote the rights and welfare of the children.

The local chief executive cited these programs during his attendance at the culmination of the National Children’s Month Celebration on Tuesday, November 26.

He noted the implementation of the Adolescent Health and Youth Development Program, which is manned by the Youth Affairs and Development Office, Sports Development Affairs, and City Population Management Office.

“[This program] aims to contribute to the total well-being of the adolescents and youth by empowering them with knowledge and skills and information on the prevention of teenage pregnancy, early sexual encounters and promotion of responsible sexuality, and peer education,” he said.

“I am proud to say that we have sustained and established increasing youth participation in various events and activities such as the Summer Youth Fest,” he added.

Another effort Rivera lauded is the intensive campaign of the Sangguniang Kabataan to empower the youth through its information drive about Anti-Bullying Law, Anti-Mendicancy Law, and Children’s Right.

The mayor also informed the attendees of the culmination that Dr. Jorge P. Royeca City Hospital has a Child Protection Unit, which was inaugurated in August 2012.

The other programs that benefit the children are the EDUKAR Gensan scholarship program and the “Lingap sa Kabataang Ayaw sa Droga” (LIKAY Droga), among others.

However, Rivera acknowledged that these programs are not yet enough to ensure the welfare of the children and youth in the city.

“But don’t get me wrong. I understand that we have so many things yet to do,” Rivera said. “Despite the overall gains and continuing efforts, I understand that some of our children and their families still face challenges. I am here to help address these problems.”

In the event, the Gensan barangays with the best child-friendly policies and programs were given award. Out of the 26 barangays, Brgy. Lagao topped the search, receiving P100,000 prize, followed by Brgy. Fatima and Brgy. Katangawan, respectively.

Over 57K kids get polio vaccine in campaign’s 2nd round