Mayor Reynaldo Tamayo is a proud dad to achiever daughter 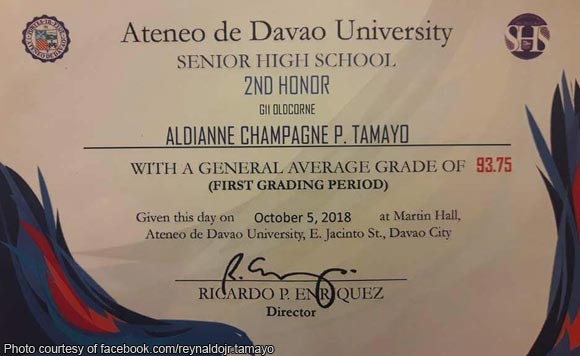 0 2,647
Share
Want more POLITIKO News? Get the latest newsfeed here. We publish dozens and dozens of politics-only news stories every hour. Click here to get to know more about your politiko - from trivial to crucial. it's our commitment to tell their stories. We follow your favorite POLITIKO like they are rockstars. If you are the politiko, always remember, your side is always our story. Read more. Find out more. Get the latest news here before it spreads on social media. Follow and bookmark this link. https://goo.gl/SvY8Kr

The Politiko admittedly said that he might have his own share of shortcomings as a dad, but his daughter never fails to amaze him.

Tupi town Mayor Reynaldo Tamayo Jr. recently showed some fatherly love to his firstborn, Aldianne Tamayo who was awarded with honors during the first grading period of her schooling. The proud papa shared the certificate of his daughter Aldianne Champagne Tamayo, a senior high school student from Ateneo de Davao, on his Facebook page.

“Despite of my shortcomings as your father, you never ceased to amaze me! congratulations my firstborn. definitely, a proud father here!”, Mayor Reynaldo wrote.

Throwback muna! Check out Uno Duterte as a cute toddler