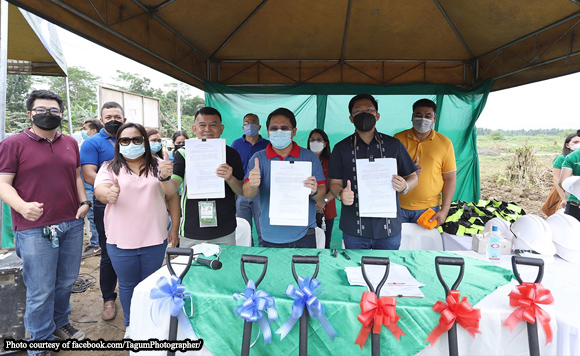 Outgoing Tagum City Mayor Allan Rellon has lauded the groundbreaking ceremony for the development of a resettlement area for the informal settlers affected by the Mindanao Railway Project (MRP)-Tagum Segment.

Funded by the national government through the Department of Transportation (DOTr), the 4.2-hectare resettlement project with proposed 312 residential lots is located at Purok Abaca in Barangay Mankilam.

Through the facilitation of the Tagum City government through its MRP-Tagum-Davao-Digos Coordinating Committee (MRP-TDD CC) and the technical working groups, the Tagumpay Train Village beneficiaries will soon be granted 62 quadruplex housing units under the first phase of the construction, with a minimum of 60 sqm per household.

A contract agreement between the city government and the R-II Builders Incorporated was also signed, marking the first day of the development works and construction of the village.

Rellon, in his speech, said he was thankful for the continued trust given by the national government to the City of Tagum.

He cited the significant role of the local government in national development building.

“This is our responsibility. As a local government, we need to make sure that everything is ready once construction begins. In my last 8 days as Mayor of this city, I’m excited that this project will be pursued and be taken care of by the next administration. Even if our political landscape changes, as long as projects are built for the service of the people, we will continue to help each other. This is for the future of our city,” Rellon said.

The event was also attended by Vice Mayor Eva Lorraine Estabillo, officials from the city government, personnel from the DOTr, representatives from the R-II Builders, and other stakeholders. #