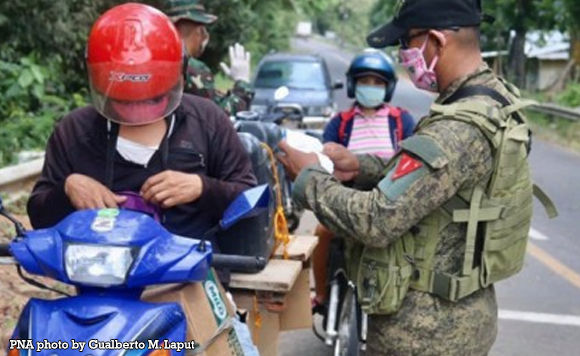 DAPITAN CITY – Mayor Rosalina Jalosjos is fuming ver the alleged refusal by the head of the Bureau of Quarantine (BOQ) provincial station in Zamboanga City to undergo checkpoint/quarantine procedures.

Jalosjos said on Monday she received an “urgent report” from field personnel on May 1 that BOQ-Zamboanga City chief Omar Aranan refused to get off his car at a quarantine checkpoint upon entering this city.

“When asked to get off the car for a temperature check and other quarantine procedure, (Aranan) refused and said he is a high official of the government,” Jalosjos said.

It was later learned that Aranan and 10 companions were supposed to inspect an oil shipment at a port in Roxas town but came here and eventually proceeded to Dakak Beach Resort when their target ship did not arrive.

Jalosjos ordered the police and local Inter-Agency Task Force (IATF) on Covid-19 to go after Aranan and company in Dakak, to tell them to follow this city’s quarantine procedures and put them in a 15-day quarantine.

“They are from Zamboanga City, they have no right to put my people in danger just because of the rank they have,” Jalosjos told the Philippine News Agency in a phone interview. “Even the president cannot easily go back to Davao (City) because of the pandemic.”

According to Emmanuel Taghoy, manager of the Provincial Office of the Philippine Information Agency, Zamboanga City’s confirmed Covid-19 cases soared to 59 as of May 2 with 29 new positive results.

Dr. Rolito Cataluña of Dapitan IATF said that Aranan and company were eventually allowed to stay overnight at Dakak after showing a mission order from their national head offices, but under strict instructions not to mingle with the locals.

Cataluña and Dr. Esmeralda Nadela of Zamboanga del Norte IATF said that Aranan and his colleagues did not coordinate with them.

After lunch on May 2, Aranan and two BOQ personnel were escorted bylocal police out of Dapitan; on May 3, the eight other customs personnel were also escorted out of this city.

PNA is still trying to get the BOQ official’s side as of this posting. –(PNA)<-strong>