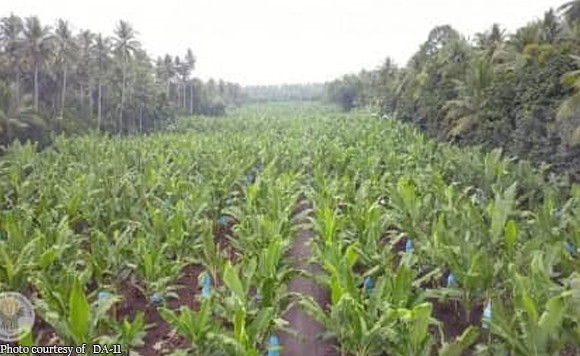 DAVAO CITY–At least nine villages in the Davao del Norte town of Sto. Tomas have been hit by a banana fungus known as Panama disease or fusarium wil.

“We hope that banana plantations through our MAGRO could contain the spread of the Panama disease if eradication is impossible,” Evangelista said.

Apart from providing technical assistance, Evangelista also ordered MAGRO to implement strategies that would lessen the impact of the fungus.

“We are taking seriously the issue at hand. Our LGU (local government unit) is taking aggressive actions to prevent the spread of fusarium wilt and protect the Cavendish banana industry here since it spurs our local economy,” Evangelista said.

Fusarium wilt, he said, has already affected some 2,402 hectares of banana plantations.

Along with the local government’s intervention program, he said the Department of Agriculture also has a Panama-disease control program where a farmer is paid PHP500 for every wilted plant that would be burned according to quarantine protocols.

“We are encouraging our banana farmers or growers to really observe proper disposal of each banana plant affected by the fusarium wilt so that it won’t spread and cause damage to the banana production,” Degorio said.

Among the implemented strategies to combat the spread of the deadly fungus, he said, including mass distribution of Trichoderma harziarum, a fungus that is also used as a fungicide, and crop shifting.

“Those severely affected by the farmers are recommended to crop shifting from banana to corn production. Our office is giving free corn seeds to affected farmers,” Degorio said.

In an interview on Tuesday, Governor Edwin Jubahib said he has already instructed the Provincial Agriculturist Office (PAGRO) to provide tissue-culture variants resistant to the Panama disease.

Jubahib also offered assistance to the banana farmers who wanted to shift into rice farming by providing heavy equipment to cultivate their farmlands.

In 2013, the province of Davao del Norte registered the highest Fusarium incidence in Davao Region with 13,743 hectares of infected banana farms. (PNA)