Mayor Climaco thanks Duterte for housing project for fire-hit families 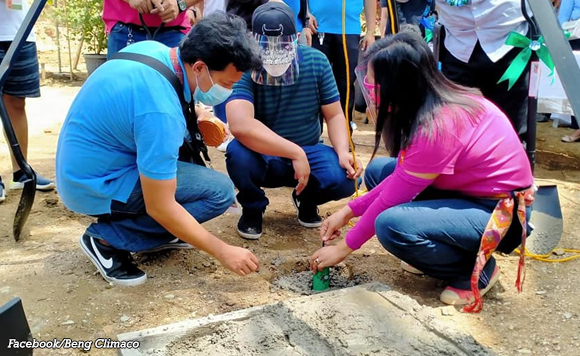 Zamboanga City Mayor Beng Climaco has expressed gratitude to President Rodrigo Duterte for fulfilling his promise to help fire-hit families in Labuan to build back better.

This as the city government and the National Housing Authority (NHA) conducted the groundbreaking ceremony for the Labuan Sea Breeze Subdivision Phase II project where 273 housing units will be constructed for families affected by the July 2018 fire incident in Labuan.

Climaco said the NHA has earmarked P163.78 million for the housing units as well as the site development.

Undertaken by the NHA through Nurben Engineering and Building Construction, the project sits in a 36,062 square meters lot purchased by the city government.

The project will house the remaining 273 out of the 411 fire victim families of Labuan.

The Sea Breeze Subdivision Phase 1 consisting of 138 units is expected to be inaugurated by first quarter of 2022, as announced by the contractor.

Climaco recalled that when the President visited Barangay Labuan on July 26, 2018, a few days after the huge fire in the area, he promised to provide housing units to all those affected by the Labuan fire.

Gov. Jayvee Uy gets some reminders from Sen. Bong Go