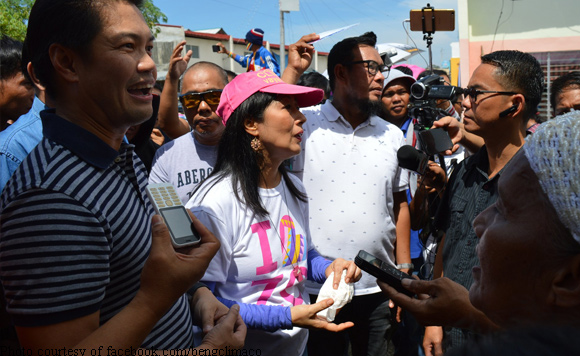 Zamboanga City Mayor Beng Climaco urged Friday Congress to conduct an investigation on the housing project for those displaced by the Zamboanga siege in 2013 after a wooden bridge in their relocation site collapsed.

The local chief executive said her office is also ready to file an appropriate legal action against those who were responsible for the apparent substandard project.

Climaco and Benitez, House committee on housing and urban development chairman, were among those who plunged into the murky water when the bridge collapsed while they were inspecting the housing project in Mariki village.

Climaco wondered if the right specifications of the materials for the construction of the bridges and houses were really followed when the project was bid out.

“So we look up to NHA to review this and conduct a thorough investigation and penalize and the city government is willing to file a legal action if needed for those who are responsible,” Climaco said.

She recalled that when the housing project was being constructed, there was a time that the city government asked that it be suspended after discovering “some substandard materials.”

She also said that when they fell on the water, they checked the wall of the footbridge and found out that it was “really made of sand.”

She said the project should be rectified and use concrete materials for the stilt bridges.

She also said that for the implementation of the project, there should be a third party to monitor it.

“Kasi the city cannot be the regulatory and also with the monitoring because he cannot be bias. That’s our recommendation,” she said.

Authorities have said that over 100,000 people were displaced in the three-week Zamboanga siege in September 2013.