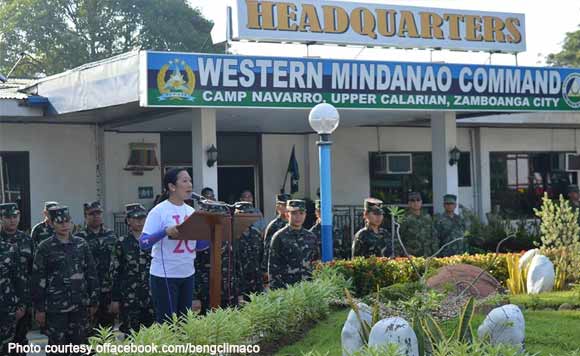 Zamboanga City Mayor Beng Climaco expressed hope Friday that the incoming Western Mindanao Command (Wesmincom) chief will sustain the security operations in the city specifically the retention of the two battalions from the Philippine Army and Philippine Marines to help thwart internal and external threats.

Lt. Gen. Carlito Galvez Jr., former Wesmincom chief, formally took over as chief of staff of the Armed Forces of the Philippines (AFP) on Wednesday, April 18, replacing Gen. Rey Leonardo Guerrero, who retired from the service.

“We are very concerned about the incoming Wesmincom chief, he must have the overall appreciation of the socio-political situation on the ground particularly in Zamboanga,” Climaco said.

“Being under martial law, they (military) are considered as martial law implementers and we will have to work closely with them. What I am asking basically for the incoming commander is to maintain that security operation in the city by retaining the two battalions of soldiers deployed to the city during the time of Gen. Galvez,” Climaco said.

President Rodrigo Duterte has placed the whole of Mindanao under martial law due to Marawi siege last year.

Climaco also cited the need to strengthen collaboration with the Task Forces in Jolo, Basilan and Tawi-Tawi.

“They must maintain very good coordination not only with military units in other areas but with the police and civilian sectors,” the mayor said.

“With the support of other local chief executives in other parts of the region, we encourage more coordination so it will prevent spillovers in the city,” Climaco added.

Duterte has yet to name the new Wesmincom chief. #