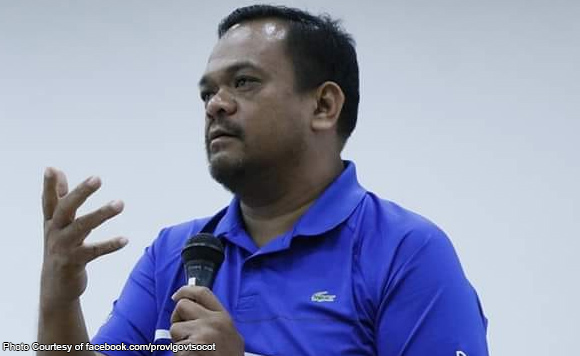 The provincial government of South Cotabato has scrapped a plan to close down its borders anew following the national government’s intervention over its stalled coronavirus disease (Covid-19) testing.

South Cotabato Gov. Reynaldo Tamayo Jr. said Wednesday they decided to forego with the border lockdown after getting additional allocation of test cartridges from the National Task Force (NTF) against Covid-19 for its testing center in Koronadal City.

Tamayo said they expect the delivery of the test cartridges “within the day” as promised by NTF chief implementer, Secretary Carlito Galvez Jr., in a brief meeting on Tuesday during the distribution of certificates of land ownership award to farmers in Arakan town, North Cotabato.

Before traveling to Arakan, Tamayo signed Executive Order (EO) No. 49 declaring another lockdown of the province’s borders in the wake of the suspension of Covid-19 testing at the local government’s partner private hospital Dr. Arturo P. Pingoy Medical Center (DAPPMC).

Tamayo said he initially decided to impose a border lockdown amid the rising suspected locally transmitted Covid-19 cases in the province and the neighboring areas, as well as the lack of available test cartridges for the laboratory’s GeneXpert machine.

“We already scrapped it (border lockdown). It is no longer necessary since the national government already intervened,” Tamayo said in a radio interview.

He thanked Galvez for taking immediate action and approving the delivery of the needed cartridges to the province.

The governor said the allotted test cartridges would be enough to cover the area’s needs.

The Covid-19 testing center at DAPPMC started its operations last June 5 following interventions from the NTF. The Department of Health delivered an initial 1,200 test cartridges for the facility.

As of Wednesday, the province already recorded a total of 104 confirmed Covid-19 cases, with 76 recoveries.

Of the 28 remaining active cases, 22 were traced to have had exposure to a locally acquired infection in Polomolok town while another from Surallah had a travel history to the fishport complex here.

Four barangays in Polomolok and one in Surallah were placed under localized lockdown due to the situation.

Tamayo said they have not yet declared the local transmission of Covid-19 in the affected areas since the recorded cases were still considered isolated.

“The spread of the virus was contained and controlled so far through contact-tracing,” he said, citing the use of the province’s Covid-19 Contact-Tracing System (CCTS), which tracks the movement of people in local communities through the use of electronic or digital logbook.

Over 10,000 establishments and offices in the province’s 10 towns and lone city have so far adopted the system and the local government has required its use in local gatherings and events, including birthday celebrations and related activities. (PNA)