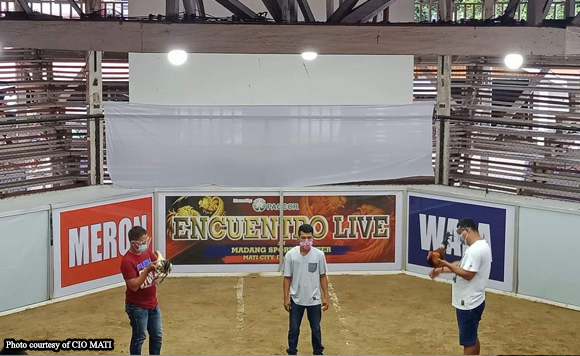 The Mati City government has allowed the conduct of online sabong.

Held at Madang Gallera Sunday, August 29, the city government said the event was licensed by the Philippine Amusement and Gaming Corp. (Pagcor).

“To ensure that health protocols are observed strictly, the City of Mati LGU dispatched personnel of the Mati Public Safety Office in the cockpit arena,” it said.

The Mati Incident Management Team also issued a permit for the event with the premise that only 30 percent of the venue’s total capacity would be occupied or a maximum of 50 individuals, whichever is lower, the local government said.

The Public Safety personnel were present during the entire duration of the online sabong to ensure that strict health protocols were observed, it added.

“Since it is an online sabong, majority of the public viewed the event thru online,” it said.

Pro-Digong, PDP-LABAN supporters: Inday Sara is the only choice