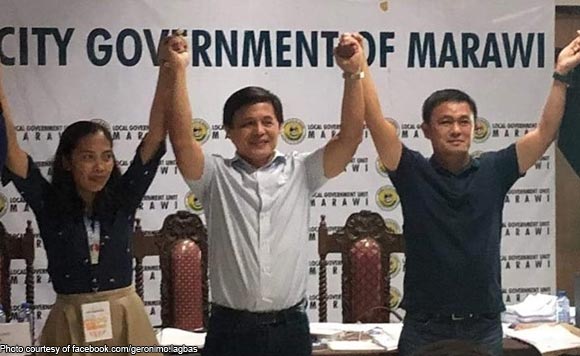 Mayor Majul Gandamra was reelected here beating three other mayoral candidates who all claimed being endorsed and supported by President Rodrigo Duterte.

With total garnered votes of 22,897, Gandamra, a lawyer, got the nod of the Maranaws to lead the city for the next three years while rehabilitation of the predominantly Muslim city is ongoing.

Taha is the son of Social Welfare and Development-12 Regional Director Bai Zorayda Taha. He is also an incumbent provincial board member of Lanao del Sur’s 1st District.

His campaign posters bear the logo of the Hugpong Ng Pagbabago — a regional political group headed by presidential daughter, Davao City Mayor Sara Duterte — claiming he is backed up by the group.

Solitario was included in Arrest Order (AO) No. 1 of the Department of National Defense which was issued shortly after President Duterte put the entire Mindanao under Martial Law following the siege of Marawi by the ISIS-inspired Maute Group. He was reportedly invited by authorities for questioning but was released later on.

Solitario was a consultant of the Office of the Presidential Adviser on the Peace Process before the attack on the city.

Taha, Solitario and Basman were present during the grand proclamation rally of PDP-Laban candidates in Marawi City last April.

Despite the claims of the three mayoral candidates that they were supported by Duterte, Gandamra said he is thankful that the President did not intervene in the political scene here.

“I am thankful, especially to the President na kahit may mga nagsasabing supported (even if there are other candidates saying that they are supported by) the President, I can feel na hindi nangingialam ang ating Pangulo sa pulitika sa (that the President does not intervene in the political affairs in) Marawi City,” he said in an interview.

On his second term, Gandamra said he will strengthen collaboration with the national government in fast tracking the city’s rehabilitation.

“Gusto natin na mapabilis ang rehabilitation ng Marawi at ito ang ating priority sa ating (we need the speedy recovery of the rehabilitation of Marawi, that is our priority in the) second term,” he said.

In July this year, residents of Barangays Daguduban and Tolali, who comprise the first sector of the most siege-affected area, will start coming back to their area to rebuild their houses destroyed by the five-month war in 2017. (PNA)

Dapitan polls in turmoil due to VCM failure