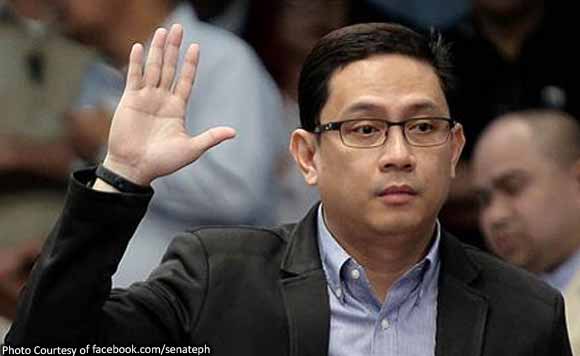 Presidential son-in-law Manases Carpio appeared before the Senate hearing on Thursday, as he sought to formally deny allegations that he was involved in the corruption activities in the Bureau of Customs (BOC).

Carpio and his brother-in-law Paolo Duterte were summoned by senators after a witness statement tagged them in the smuggling of the P6.4 billion-worth of illegal drugs from China.

“I am here to give due respect to the committee invitation and defer to the authority of the Senate to conduct inquiries in aid of legislation. Me and my brother-in-law have been publicly crucified based on rumors and gossips,” Carpio said in his opening statement.

Carpio, who is married to Davao City Mayor Sara Duterte, was initially tagged by Customs fixer Mark Taguba as one of the leaders of the so-called Davao Group that facilited the smuggling in the BOC and said he had visited Customs multiple times.

But the lawyer insisted he only set foot in the BOC to represent his clients.

“I am here before this committee to formally declare that I have no knowledge of or involvement in the illegal drugs shipment which is the subject matter of this inquiry and to assist the committee in whatever way I can as a resource person,” said Carpio.

First appearance of Paolo, Mans in Senate will probably be their last – Dick