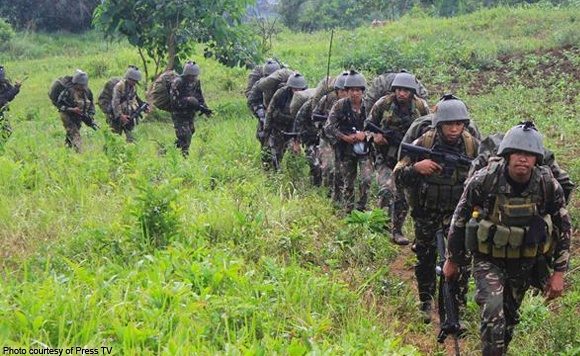 0 201
Share
Want more POLITIKO News? Get the latest newsfeed here. We publish dozens and dozens of politics-only news stories every hour. Click here to get to know more about your politiko - from trivial to crucial. it's our commitment to tell their stories. We follow your favorite POLITIKO like they are rockstars. If you are the politiko, always remember, your side is always our story. Read more. Find out more. Get the latest news here before it spreads on social media. Follow and bookmark this link. https://goo.gl/SvY8Kr

Focused military operations against the Abu Sayyaf Group (ASG) bandits will continue until all the terrorists have surrendered or neutralized.

Intensified operations against the brigands was ordered by President Rodrigo Duterte upon his assumption of the Presidency last July.

“The focused military operation will continue until we deal a crippling blow against the ASG and rescue the remaining hostages (of which there are still an estimated 12),” he added.

The clash stemmed from reports of concerned civilians who spotted eight heavily-armed ASG bandits in their area.

This prompted military authorities to deploy a patrol who then chanced upon the brigands, killing two and scattering the rest.

Rangers recovered the body of one of the slain terrorists together with an M-16 assault rifle with M-203 grenade launcher attached and one improvised explosive device (IED).

Another ASG was killed and was being carried by companions according to reports by local residents.

This brings to 38 the total number of ASG killed since the intensified combat operations was launched in July while scores were also wounded on the ASG side while government security forces sustained 15 killed in action and 28 wounded in action since July.