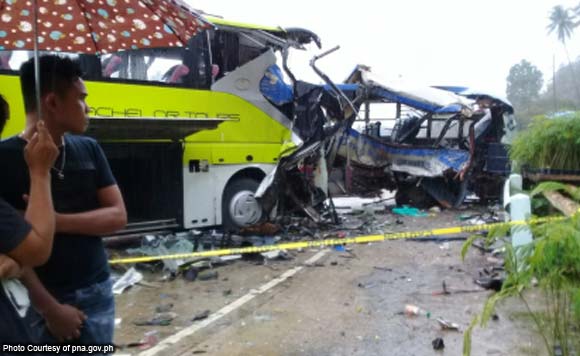 DAVAO CITY – The Land Transportation Franchising and Regulatory Board (LTFRB) has temporarily suspended the franchise of Metro Shuttle bus company for a month following Monday’s deadly collision in Compostela Valley province that left seven people dead and 30 others wounded.

The Metro Shuttle Bus company is also facing charges for multiple deaths, physical injuries, and damage to property, as well as breach of franchise condition in the aftermath of the road mishap in Nabunturan town.

LTFRB-11 (Davao) Director Cattleya Acaylar said Tuesday the bus company was also found operating outside its franchise area as the unit involved in the accident was only allowed to ply the Davao-Tagum route.

Acaylar said Metro Shuttle, which has 34 buses plying the Davao-Tagum route, will be required to train its drivers and conductors on road safety before its suspension could be lifted.

Chief Supt. Marcelo Morales, Police Regional Office 11 director, said they are investigating the cause of the accident.

“We cannot predict accident but we can also avoid it. If its human error, or if there are lapses from the management due to poor maintenance of the vehicle, we will let the management answer and account for that,” Morales said.

Initial investigation showed the incident occurred after the front tire of the Metro Shuttle bus exploded, causing it to swerve to the lane of another passenger bus.

The Metro Shuttle was bound for Veruela, Agusan del Sur from Tagum City, while the Bachelor Bus was heading towards Tagum City from New Bataan, Compostela Valley. (PNA)