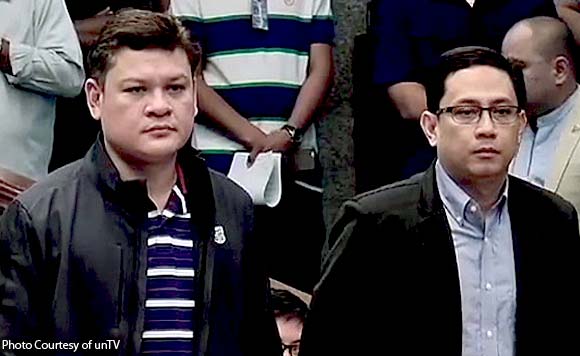 DAVAO CITY – The lawyer of Presidential son and former vice mayor Paolo Duterte and Manases Carpio, Duterte’s brother in law admitted on Tuesday that the camp of Senator Antonio Trillanes IV made no settlement offer in connection with the libel charges his clients had filed against the senator.

Rainier Madrid said there was actually no effort from the Trillanes camp for an out of court settlement because “(o)ur position was clear from the very start.”

“No settlement. My clients want the trial to proceed,” he said by phone. “The mediation had been terminated.”

Earlier, Madrid was quoted in reports as saying that Trillanes’ camp had offered to settle.

This was disputed by Trillanes’ lawyer, Reynaldo Robles, who is also senior partner at ChanRobles.

But Robles confirmed that a mediation hearing was held at the Philippine Mediation Center here on March 22 but maintained that they did not offer any settlement.

Robles said the mediation was ordered by Davao City Trial Court Judge Melinda Alconcel-Dayanghirang, who is hearing the cases filed against the senator.

“(It’s a) mandatory process but no settlement offered,” he said in areport by the Philippine Star.

Madrid, short of saying he was misquoted, said the Trillanes camp had not made any offer at all. “No offer,” he added.

Libel is among cases that can be subjected to Court-Annexed Mediation or CAM.

The court would sometimes order the conduct of a CAM for civil aspect of criminal cases, which has a penalty of imprisonment of not more than six years.

Aside from libel, simple theft and estafa – except syndicated or large scale – can also be subjected to CAM in a bid to speed up resolution.

When parties involved fail to reach an agreement, a trial would follow.

Madrid said with the termination of the mediation, his clients now want a full trial of the libel cases they had filed against Trillanes.

The senator faces four counts of libel here over his radio interviews, in which he allegedly accused Duterte and Carpio of extortion and drug smuggling.

Dayanghirang then issued four warrants of arrest against Trillanes, for which he posted bail.

On January 15, 2019, Trillanes came to the city and pleaded not guilty during his arraignment at Dayanghirang’s sala.

With the mediation having achieved nothing, Madrid said a Judicial Dispute Resolution would soon be taking place.

As in the mediation, the JDR judge will also determine the possibility of “conciliation, mediation or early neutral evaluation in order to settle a case at the pre-trial stage” at this stage.

In the event of failure of JDR, the judge will then proceed with the trial.

Madrid said what his clients wanted was for Trillanes to go under trial.

“After the JDR, there will be preliminary conference and then trial. There will be marking of exhibits. We have many witnesses lined up,” he said, adding that they were ready to go on trial any time.

He said the police’s Criminal Investigation and Detection Group was instrumental in their gathering of evidence and witnesses.

“Hopefully, the trial would be finished within the year,” he added. (PNA)