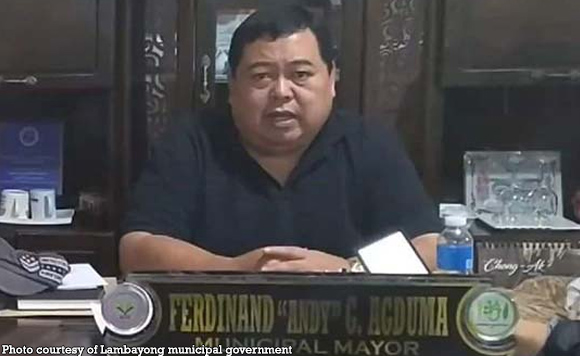 Recinto, 62, was driving home to Lambayong, this province, coming from this city when shot by motorcycle-riding gunmen around 1:30 p.m. Tuesday along the national highway in Barangay Bilumin.

“This is barbaric,” Mayor Ferdinand Agduma of Lambayong said on the gun slay of Recinto.

Agduma said the local government will offer a cash reward for anyone who can provide information that may lead to the arrest and prosecution of the suspects in the killing of Recinto, who was also the former mayor of Lambayong.

“Definitely, we are ready to offer (cash) rewards,” he said.

Agduma, a nephew of Recinto, also urged the police and the military “to expedite the dispensation of justice for my uncle who was brutally murdered.”

“Hot pursuit operation had been going on, we are following up leads,” said Lt. Colonel Lino Capellan, spokesperson for the police in the Soccsksargen region.

Quoting a report from Lambayong police, Capellan said the victim was heading to the town proper when two men riding tandem on a motorbike shot him at close range.

Responding policemen and soldiers rushed Recinto to the hospital in this city but was pronounced dead on arrival by attending physicians.

“He has no known enemies, he was everybody’s friend here, he has retired from politics, why he was killed is a puzzle to us,” Agduma said.

Former Governor Pax Mangudadatu also condemned the killing and called on authorities to bring justice to the fallen public servant.

He is the father of Lambayong Vice Mayor Francis Eric Recinto and town councilor Joseph Recinto.