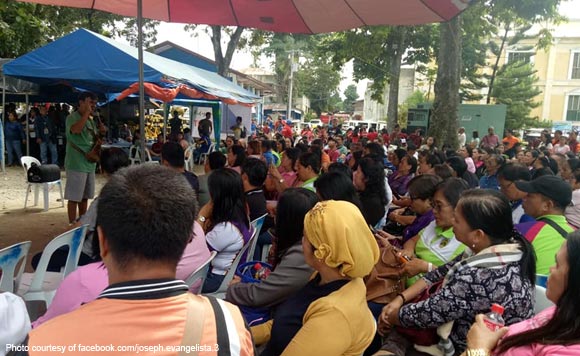 0 95
Share
Want more POLITIKO News? Get the latest newsfeed here. We publish dozens and dozens of politics-only news stories every hour. Click here to get to know more about your politiko - from trivial to crucial. it's our commitment to tell their stories. We follow your favorite POLITIKO like they are rockstars. If you are the politiko, always remember, your side is always our story. Read more. Find out more. Get the latest news here before it spreads on social media. Follow and bookmark this link. https://goo.gl/SvY8Kr

KIDAPAWAN CITY — Mayor Joseph Evangelista here has ordered forced evacuation of some 500 families living in an upland village due to possible landslides and rockfall.

Evangelista issued the directive after the Mines and Geosciences Bureau reported that an area in Barangay Ilomavis is no longer safe for human habitation due to possible landslides.

Hundreds of residents in Barangay Ilomavis have moved to safer grounds following the series of earthquakes that rocked Mindanao and triggered landslides at the slopes of Mt. Apo.

“The residents are given until 5 p.m. Wednesday to vacate the village and move to the lowlands to ensure they are safe from harm,” Evangelista said.

Evangelista has also asked members of the city council to approve the purchase of some five hectares of land far from Ilomavis to serve as a relocation site.

Ilomavis hosts the Energy Development Corporation (EDC) Geothermal power plant and some of its workers are residents of the village.

After three major quakes, landslides occurred along the lone route to the geothermal plant.

Houses were also destroyed by falling rocks and landslides. (PNA)