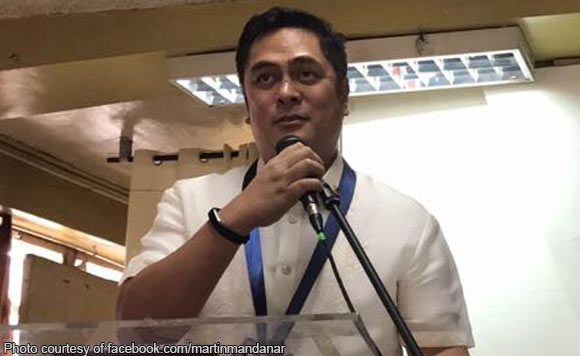 0 186
Share
Want more POLITIKO News? Get the latest newsfeed here. We publish dozens and dozens of politics-only news stories every hour. Click here to get to know more about your politiko - from trivial to crucial. it's our commitment to tell their stories. We follow your favorite POLITIKO like they are rockstars. If you are the politiko, always remember, your side is always our story. Read more. Find out more. Get the latest news here before it spreads on social media. Follow and bookmark this link. https://goo.gl/SvY8Kr

Some members of the religious group Kapa Community Ministry International, Inc. were allegedly behind the murder of Eduardo Dizon, a broadcaster of Brigada News FM-Kidapawan, Palace officials said.

Presidential Communications Operations Office Secretary Martin Andanar said that this was based on the testimony of at least two witnesses who were present during the press briefing in Malacanang Thursday, August 22.

“The suspects, based on our witnesses’ affidavits are Kapa members who are also media people themselves,” he said.

“The reason why they are here is to assure them of government protection as they are being subjected to intimidation or other forms of threat by the suspects who, based on our information, are influential people in their province,” Andanar said.

The two witnesses both wearing masks and caps were Renato Sardoncillo; and Hilario Lape, Jr. who acted as the spotter during the actual shooting of Dizon, according to Andanar.

Lape was one of the four suspects who were initially charged for Dizon’s killing, said Presidential Task Force on Media Security (PTFoMS) Undersecretary Joel Egco.

But because Lape was the “least guilty,” he was tapped to be a state witness, he said.

Since preliminary investigation is still ongoing to determine if there is probable cause for the filing of appropriate charges in court, no warrants of arrest have been issued against the suspects, Egco said.

Dizon was killed in Kidapawan City, North Cotabato on July 10.

The victim was allegedly critical of Kapa, which President Rodrigo Duterte ordered closed last June for allegedly being an investment scam.