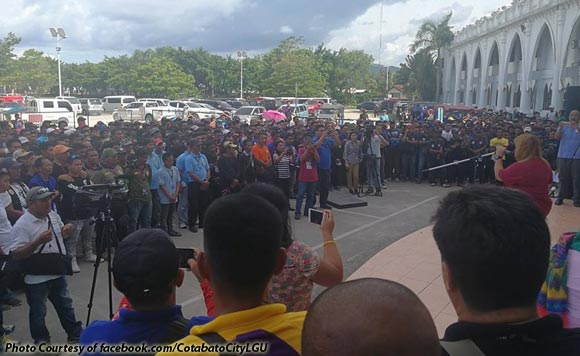 Terrorists and sympathizers who dare venture into Cotabato City will have to deal with the prospect of execution by the city’s barangay tanods.

Some 1,000 of the tanods had vowed to execute members and sympathizers of the Dawlah Islamiya and Ansa’r Al-Khilafa if they find them in the city.

Mindanao has been under martial law for nearly a month due to the threat posed by the Maute group, which has allied with the terrorist IS group.

On Wednesday afternoon, the barangay tanods held an emergency assembly in the compound of the People’s Palace to show solidarity against terrorism.

For her part, the mayor, who chairs the inter-agency city peace and order council, assured residents of the tanods’ commitment.

Meanwhile, Gongona said they will excuse the city’s barangay tanods from the gun ban so long as they coordinate their community patrols.