Kahit puro hangin: Piñol to stay in Cabinet until Duterte fires him 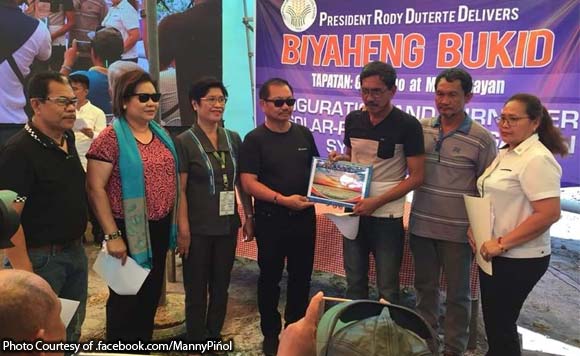 0 294
Share
Want more POLITIKO News? Get the latest newsfeed here. We publish dozens and dozens of politics-only news stories every hour. Click here to get to know more about your politiko - from trivial to crucial. it's our commitment to tell their stories. We follow your favorite POLITIKO like they are rockstars. If you are the politiko, always remember, your side is always our story. Read more. Find out more. Get the latest news here before it spreads on social media. Follow and bookmark this link. https://goo.gl/SvY8Kr

The latest SPIS costs P5.3 million and the unit was completed within three months. It is expected to irrigate up to 60 hectares.

Rustom Catalan, a farmer-leader in rice-producing Barangay D’Lotiulla, said the farmers can now plant palay in three croppings as compared when they only plant and harvest once a year due to lack of water.

With the solar-powered pre-harvest facility, the farmers could save at least P100,000 per cropping for fuel expenses.

Speaking to farmers, Piñol said: “While I was working in the field, rumor swirled that I have resigned following the ‘he is all air’ joke of President (Rodrigo) Rody Duterte, referring to me, during an event in Palawan last week.”

Piñol said he has not resigned, saying “Unless the President tells me he no longer needs my services; I will continue working.”

In a statement, Piñol said he was convinced the President was just joking having known him the past 25 years.

He recalled a previous incident where he said “linti ni si (damn this) Piñol,” and asked the President if the latter was angry at him.

“Murag wala man ka naanad sa ako. Standard joke ko ‘yon (It’s as if you don’t know me for so long. It is just my standard joke),” the President told Piñol.

On the statement of the President that the country would never be rice sufficient, Piñol said he considered that as a challenge rather than ridicule.

“I firmly believe that Filipino rice farmers with 4.9 million hectares, only 1.2 million of which are irrigated could produce enough rice for the country if given support with more irrigation facilities, good seeds, and fertilizer,” Piñol said. (PNA)