JV tells South Cotabateños: Count on me to back martial law extension 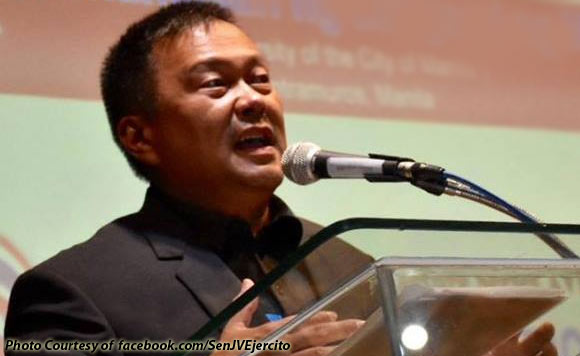 Senator JV Ejercito told South Cotabato folk that he is with them in their supposed collective desire to extend martial law down south.

Ejercito made this declaration during the culmination program of the 2017 T’nalak Festival, a Brigada News FM Koronadal report Friday (July 21) said.

As such, the senator assured the residents of the province that he will support the extension of military rule in Mindanao during the scheduled special Joint Session of Congress on Saturday, July 22.

Ejercito said he saw for himself the South Cotabateños’ happy participation in the festival events despite the regime of martial law. He reckoned that people feel safer because of it.

The politiko went on to note that martial law during the time of President Ferdinand Marcos was used to prolong the latter’s stay in power, whereas President Rodrigo Duterte’s martial law declaration in Mindanao was aimed at fighting rebellious forces.

This year’s T’nalak Festival coincides with the 51st Founding Anniversary of South Cotabato. #