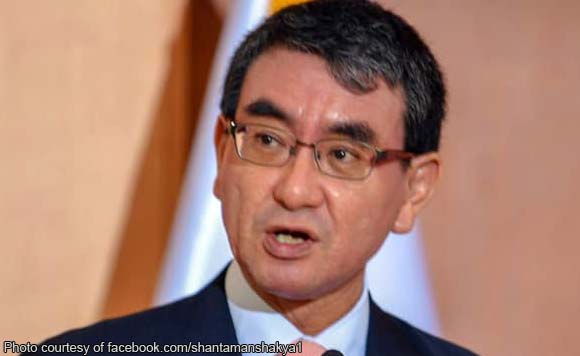 Japanese Foreign Minister Taro Kono is slated to visit the Philippines on Saturday, the Department of Foreign Affairs (DFA) has announced.

The foreign minister was invited by Foreign Affairs Secretary Teodoro Locsin Jr. for an official visit to the country from February 9 to 11.

According to DFA spokesperson Elmer Cato, Kono will meet with Locsin in Davao on Sunday for a bilateral discussion on areas of mutual interest, including political, economic, and people-to-people engagement.

Cato said the two officials will also tackle Japan’s support for infrastructure development and for Mindanao in the wake of the ratification of the Bangsamoro Organic Law.

While in Davao, Kono is scheduled to call on President Rodrigo Duterte and meet with other Cabinet officials. He will also grace the inauguration ceremony of the Japanese Consulate General in Davao.

Japan played an active role in the construction of the recently-inaugurated Bohol-Panglao Airport and the Metro Manila Subway
System project.

In Mindanao, Tokyo is planning to modify its existing support to the Autonomous Region in Muslim Mindanao (ARMM) for the establishment of the new Bangsamoro Transition Authority, a governing body that will be
in place during the transition period towards the Bangsamoro government creation in 2022.

In a statement, Cato said Kono’s trip to Davao is “a testament to the strengthened strategic partnership between the Philippines and Japan,
and an affirmation of our long-standing bilateral friendship.”

Kono had his international debut as Japan’s foreign minister at the 50th ASEAN Foreign Ministers’ Meeting in Manila in August 2017.

During his first trip to the Philippines as a ranking ministry official, Kono called on Duterte at the Philippine International Convention Center. (PNA)

DND refuses to confirm Jolo bomber is IS emir in PH