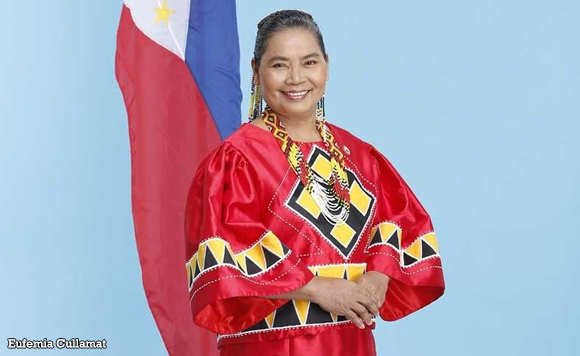 The League of Caraga Indigenous Peoples Mandatory Representatives (LCIPMR), in its Resolution No. 4 series of 2021 issued on January 29 in Surigao del Sur, declared Cullamat as ‘persona non grata’ in the ancestral domains of the Manobo, Mamanwa, Mandaya, Higaonon, and Banwaon Indigenous Cultural Communities/ Indigenous Peoples (ICCs/IPs) of Caraga Region.

The LCIPMR said the latest rally led by Cullamat in front of the NCIP office in Quezon Avenue, Quezon City on the same date was mere propaganda.

“They had no interest at all for dialogue even given the presence of NCIP Chairperson Allen Capuyan. This only proves that these groups will stop at nothing and will continue to misrepresent and control the ICCs/IPs for their own personal gains and ideology,” the resolution reads.

In a post, NCIP said Capuyan tried to engage protesters in front of the NCIP office on their alleged claims of atrocities against the IPs but to no avail.

Capuyan said while he distributed copies of the NCIP Annual Accomplishment Report for 2019 so that protesters are informed of the programs and initiatives of the agency, the rallyists threw them away.

Datu Rico Maca, regional secretary of the PCIPMR, said the ICCs/IPs of the Caraga Region have been suffering from decades of manipulation, misrepresentation, and atrocities by communist terrorist groups and their supporters.

He said these groups seek to control the lives of IPs and the whole community, their ancestral domains, and exploit their resources in the guise of protecting the IPs’ political and cultural ideology.

“Eufemia Cullamat, representative of Bayan Muna, does not and will not represent the ICCs/IPs of Caraga Region,” he said.

LCIPMR said the recent protest in front of the NCIP office was a clear violation of the sacred and governing customs and traditions of the IPs of the Caraga Region.

LCIPMR added that NCIP has continuously protected and promoted the interest and well-being of the IPs with respect to their tradition, customs, beliefs, and the institution most especially in Caraga.

“We will no longer tolerate and allow the group of Eufemia Cullamat to misrepresent, manipulate, and use the ICCs/IPs of Caraga as pawns to serve their personal objectives and fruitless campaigns,” Maca said.

The signatories to the resolution are recognized leaders of the IPs and ICCs who represent various local legislative councils of the Caraga Region. (PNA)